Why you should definitely trek Ecuador's Avenue of the Volcanoes 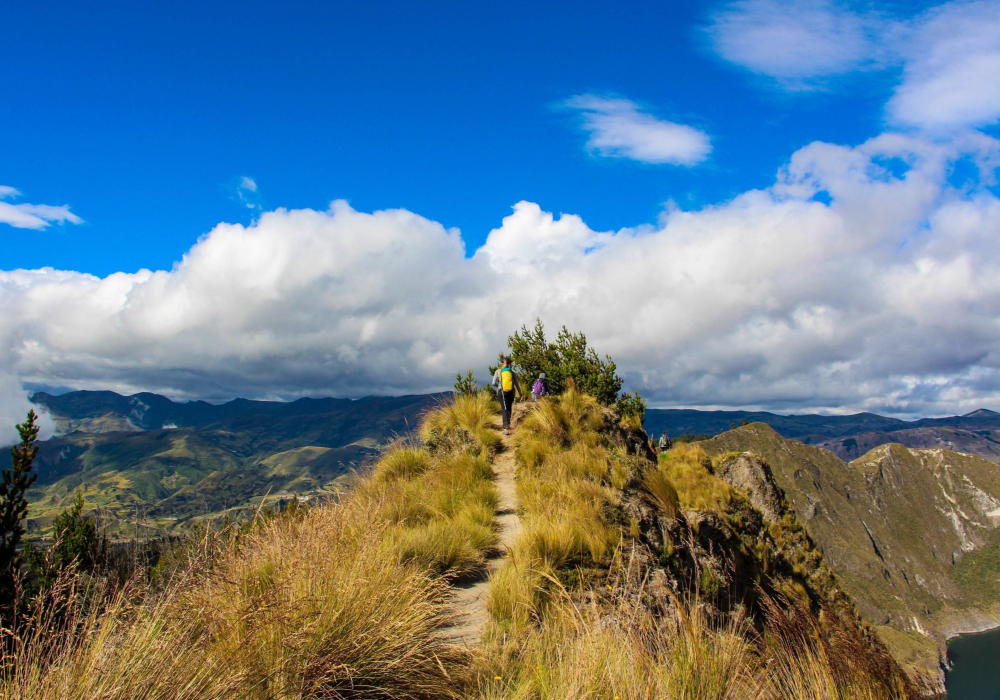 One of the best ways to get off the beating track if you're visiting Quito in Ecuador is to plan a trek and take in the natural beauty of the Avenue of Volcanoes. The volcano-lined corridor was so-named by the famous German explorer Alexander von Humbolt in the 1800s.

The Avenue of the Volcanoes (or Cordillera de los Volcanes) is considered one of the most spectacular hikes on the planet. In addition to stunning waterfalls and steep valleys, the mountains are home to over ten active volcanoes and a wide array of glaciers — several of which can be seen from the Avenue itself.

Many of the magnificent volcanoes have a national park named after them, including, among others — from south to north — Sangay, Chimborazo, Llanganates, Iliniza, Cotopaxi, Antisana and Cayambe-Coca.

The ecologically diverse landscape was declared a World Heritage Site by UNESCO in 1987. The experience offers native wildlife and natural beauty at its best. Prepare to be amazed.

The Avenue of the Volcanoes represents a chain of volcanoes running along the northern border of Ecuador from the northwest to the southeast. It is part of the Andean Volcanic Belt, which is over a thousand kilometres long. Many of the volcanoes in Ecuador are still active, and the country has some of the most biodiverse rainforests in the world.

The Andes make up the most extended continental mountain range globally, stretching from Peru to Chile and Argentina. Along this spine of peaks and volcanoes, you’ll find a jewel of South America: Ecuador.

The Ecuadorian Andes is the perfect destination for trekking enthusiasts. It boasts an impressive network of trails, from easy to strenuous; and is home to some of the most spectacular views in Ecuador.

The tallest among the Avenue of the Volcanoes' summits, and Ecuador's highest, is the dormant ice-caped Chimborazo — standing at 20,564 feet (6,267 metres). It's the highest point on Earth when measured from the centre of the Earth. Despite its height, it's still accessible to fit intermediate-level amateur mountaineers. It's not considered a highly technical climb because you will not encounter sheer vertical walls requiring ice climbing skills.

As required by Ecuadorian law, it's essential to hire the services of a professional and certified mountain guide as the climb involves challenging weather, probabilities of avalanches, plenty of glaciers, and some dangerous crevasses.

The best way to reach Chimborazo is via Riobamba — an Andean city located along the Avenue of Volcanoes. It's about 200 kilometres (120 miles) from the capital city of Quito. Several tour operators have a base in Riobamba. The Chomboraza National Park is about an hour's drive from Riobamba. Tour operators can arrange transportation to the park entrance and refuges ahead of your climb.

The two main refuges on the mountain are Carrel refuge located at 15,744 feet (4,800 metres) and Whymper refuge at 16,400 feet (5,000 metres). The climb is typically done from before midnight and dawn. It takes about 7 to 8 hours to reach the summit.

Special mountaineering gear is compulsory. Equipment you will need includes trekking boots, a helmet, a climbing harness and crampons. Of course, as the journey takes place overnight, climbers must have adequate lighting equipment (headlamp/flashlight) and proper alpine outerwear.

The second-tallest, Cotopaxi — standing at 19,347 feet (5,896 metres), is arguably Ecuador's most famous volcano. As the above photo reveals, it's situated just to the southeast of Quito and offers a magnificent view behind the capital city's skyline.

Many amateur and experienced mountaineers respond to the call of the equatorial glacier, one of the highest active volcanoes in the world, and venture up to explore. There are several guided treks available. The climb is not considered technical, but it's not a walk in the park either. It also requires climbers to be properly acclimatized to high altitudes and a certain level of physical fitness.

The Cotopaxi National Park is located approximately 55 kilometres south of Quito. Several agencies can arrange 4×4 transportation to the National Park entrance and onward to the parking lot. Climbers can then hike up from the parking lot and prearrange to be picked up the next day. ​​​​​A refuge is available for a fee ($32 USD) where breakfast and lunch are served.

The about one-hour trek up from the parking lot to the refuge at the volcano base, at 15,700 feet, is already an adventure, but more ambitious mountaineers can spend the night and climb further up to the snow-capped peak (a 6-hour journey) early the next morning. Again, an important note is that you are required to hire an accredited mountain guide to accompany you. Like Chimborazo, some gear you'll need are crampons, ice axes, crevasse rescue gear, and ropes.

Hiking the Quilotoa volcano is one of the most popular activities in Ecuador. This is due to the dormant volcano's easier access and Instagram-worthy photogenic 3 kilometre-wide crater filled by the 240 metre-deep vibrant green-hued Laguna Quilotoa. It's one of the shorter mountains on the Avenue of the Volcanoes, standing at 12,841 feet (3,914 metres).

To get to Quilotoa, you will need to drive 165 kilometres from Quito down to the town of Zumbahua along the E35/E30 highways. Alternatively, you could fly to Cotopaxi International Airport in Latacunga and drive in from there.

Quilotoa is a great starter hike to get acclimatized to higher altitudes. The 6-mile (10 kilometres) hike offers the reward of stunning views up to the rim and down into the emerald lake filling the crater formed around 600 years ago from a volcanic collapse.

If you’re a purist, the hike to Quilotoa is probably not your cup of tea. But if you want to experience what it’s like to be on the edge of one of the world's most beautiful volcanoes, you can do many things within an hour or two. The hike down to the Laguna from the viewing point is about 30-45 minutes, and the hike bike up is 1-2 hours long.

Wear appropriate footwear — sneakers and hiking boots are best — and make sure to bring a camera.

(NC) Most of us have spent the winter cooped up indoors and are waiting for the slightest hint of wa [ ... ]