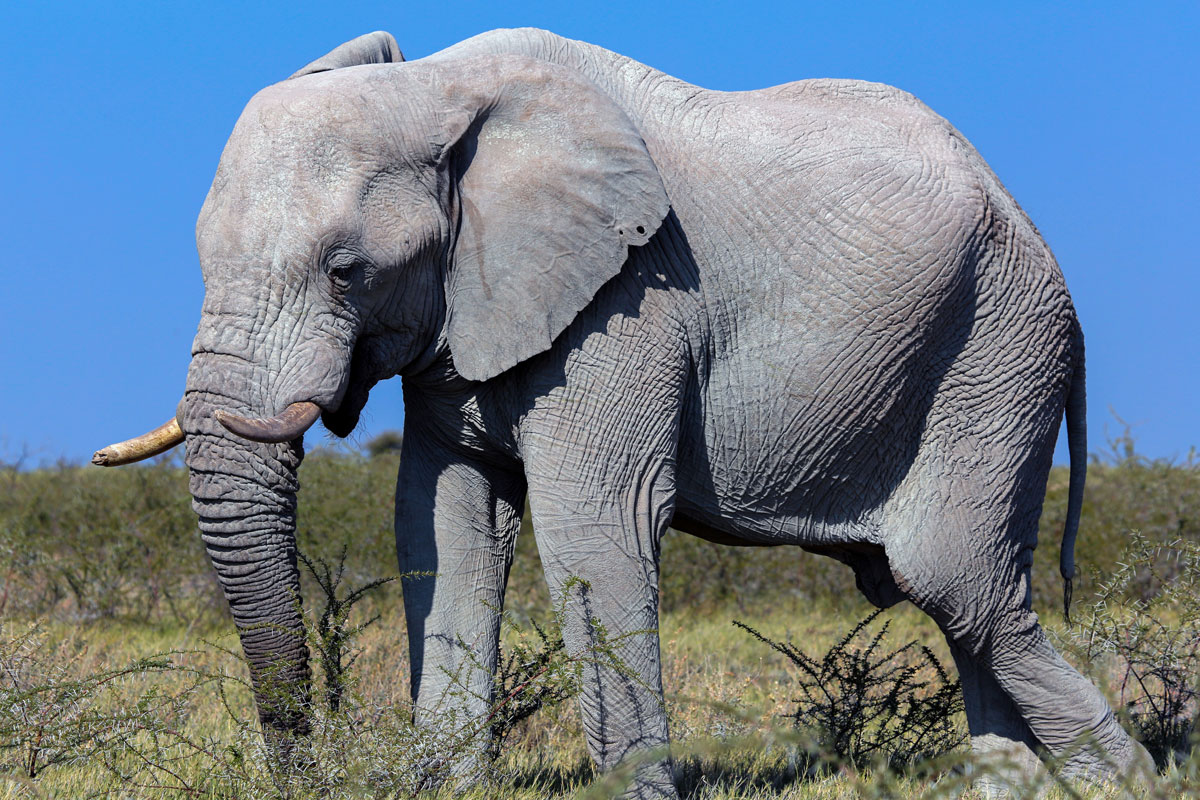 Etosha National Park was high on the list when planning my self-drive adventure in Namibia. It's one of the world's greatest places to see wildlife. Covering a vast 22,270 square km domain, it's home to over 100 mammal species, 340 types of birds, as well as 110 reptile species.

The name Etosha means "Great White Place" — a reference to the large dried pan in the middle of the National Park. Comprising of no less than 25% of the park, the Etosha Pan is the biggest salt pan in Africa. The pan is around 130 km long and as wide as 50 km in some parts. It's quite an impressive sight, and the area is actually visible from space.

After landing in Windhoek, the first item on the agenda was to pick-up our rental 4x4 vehicle and drive right away towards Etosha Park with the goal of getting there before sunset. The 5 to 6-hour drive is on paved roads (B1 highway and C38), so I was able to drive at a reasonable enough speed which allowed us to arrive at the Emanya@Ethosha Game Lodge, located near the town of Tsumeb, just as the sun was setting. 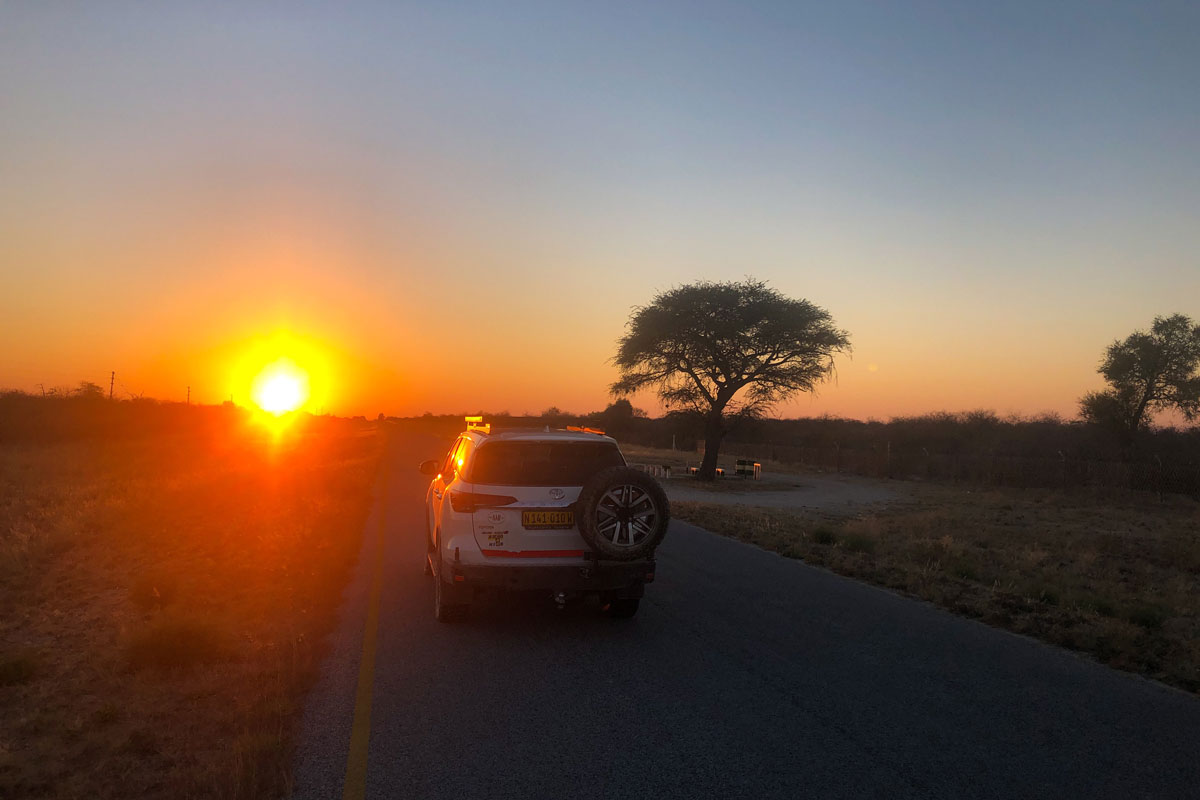 After a restful night, Amaria and I set out at the first rays of sunrise to make the 20-minute drive from Emanya Lodge to the eastern gate of Etosha National Park — the von Lindequist Gate. After registering ourselves and the vehicle at the gate, we were off to embark on this long-awaited adventure.

It's recommended to get there early and to search for water holes where animals living in the park gather. It's especially true during the dry season from May to December because water is more scarce and animals must visit water holes every day.

The National Park is made up of a series of interconnecting gravel roads. I didn't have a set path to follow, so I decided to drive alongside the pan's edges while occasionally switching course and heading down random gravel roads into the bush.

Then, we suddenly got lucky and came upon a water hole where three other vehicles of intrepid self-drive game seekers had parked and taken out their cameras to capture a fantastic scene. 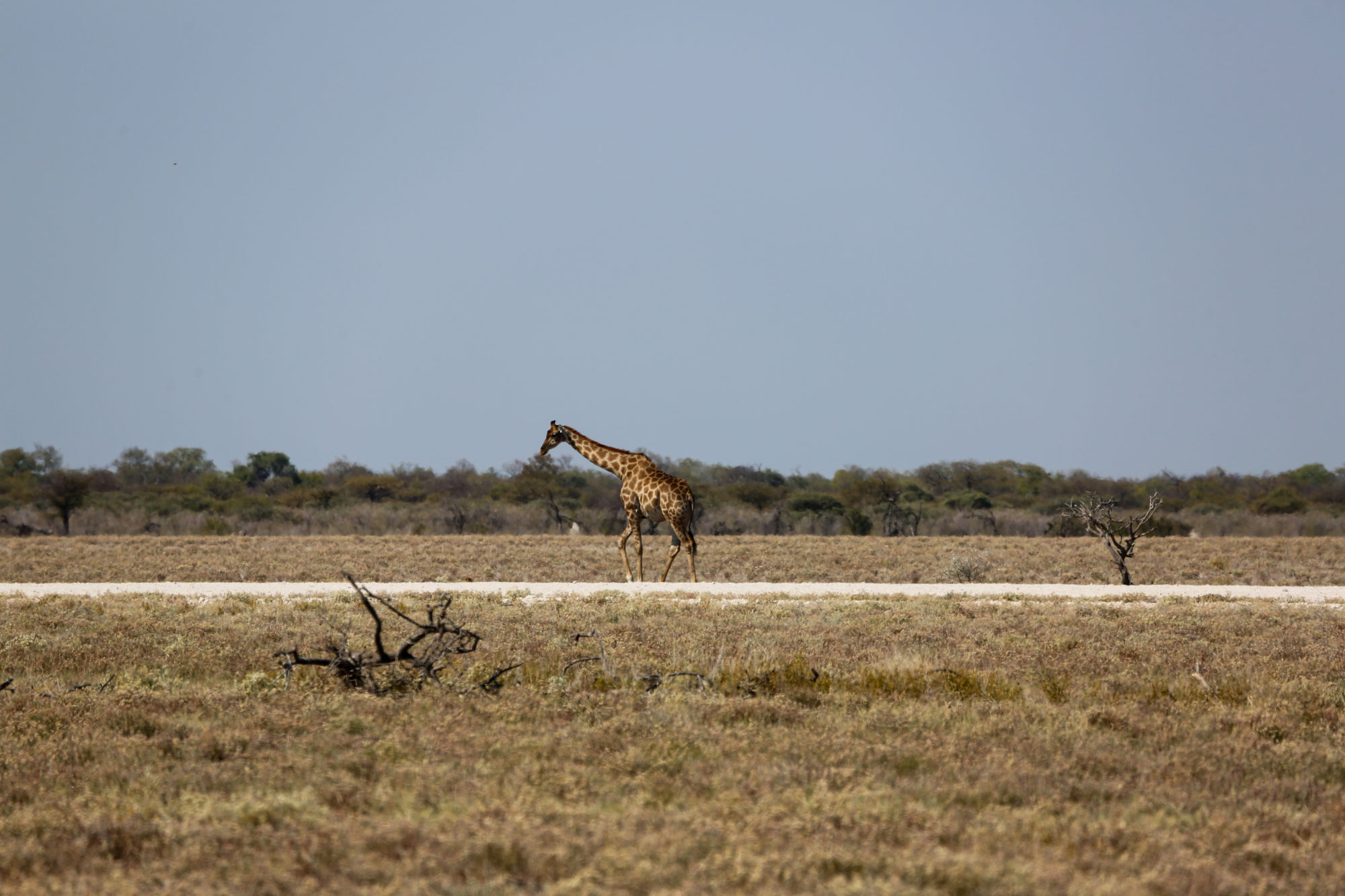 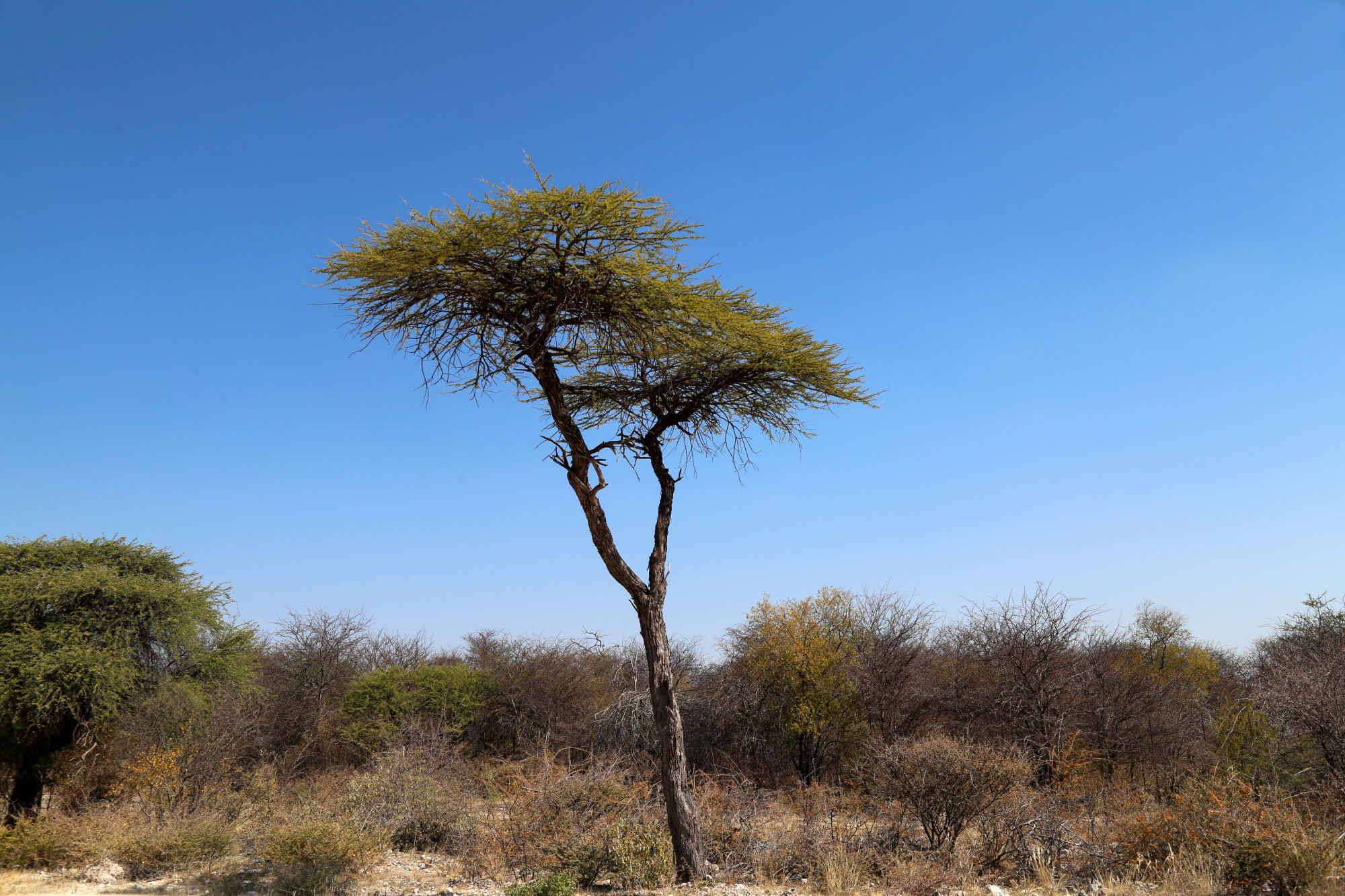 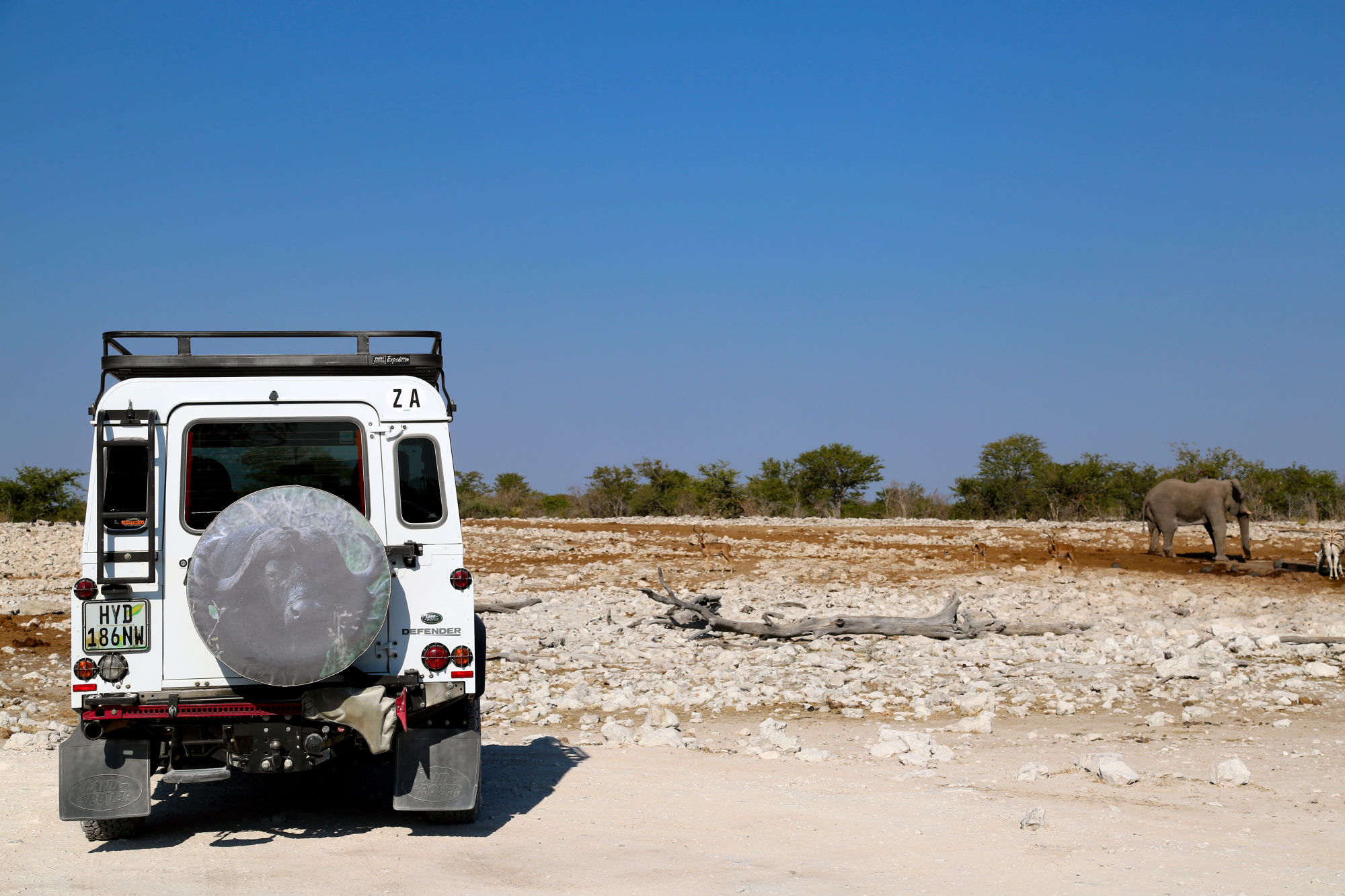 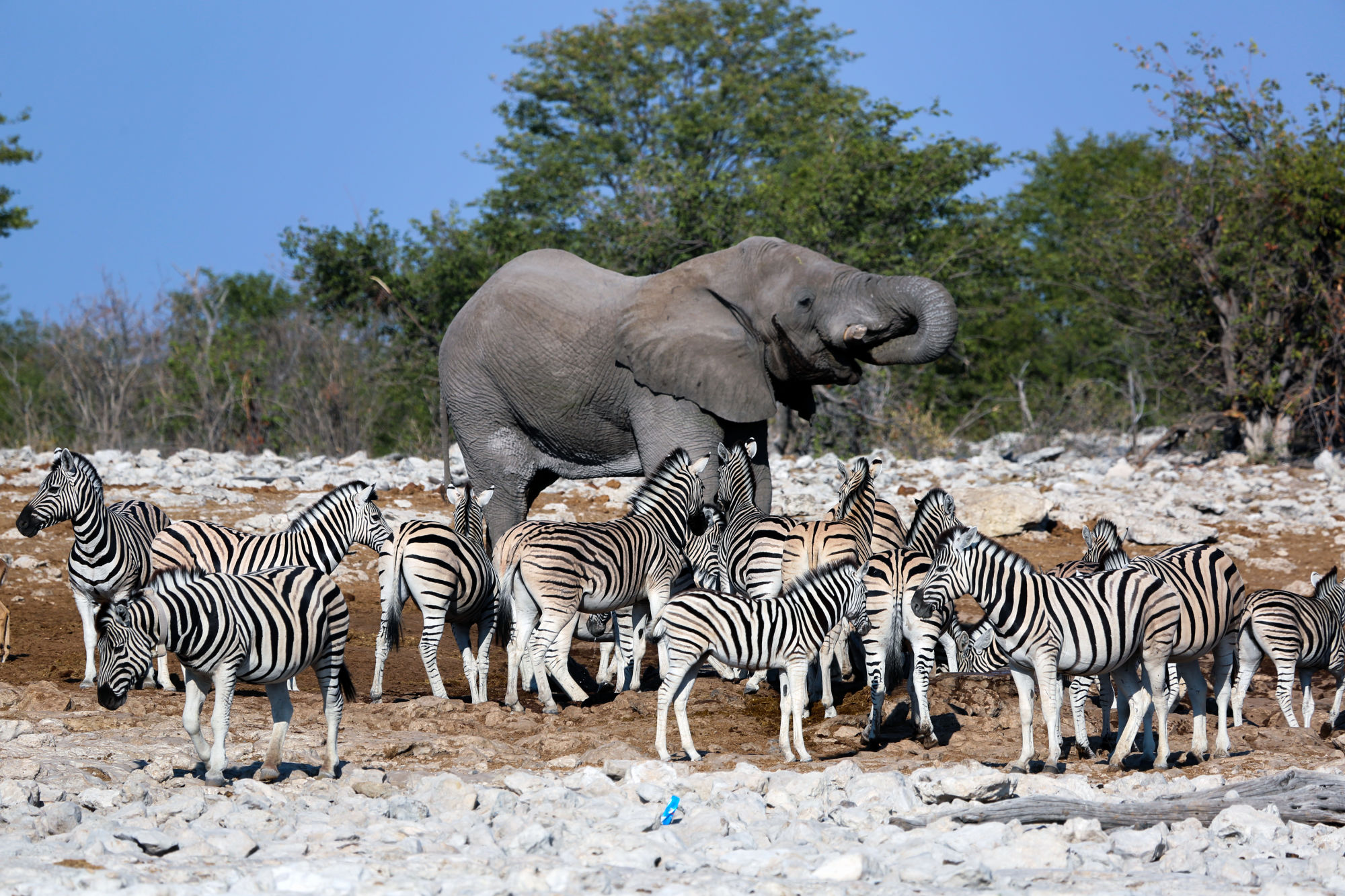 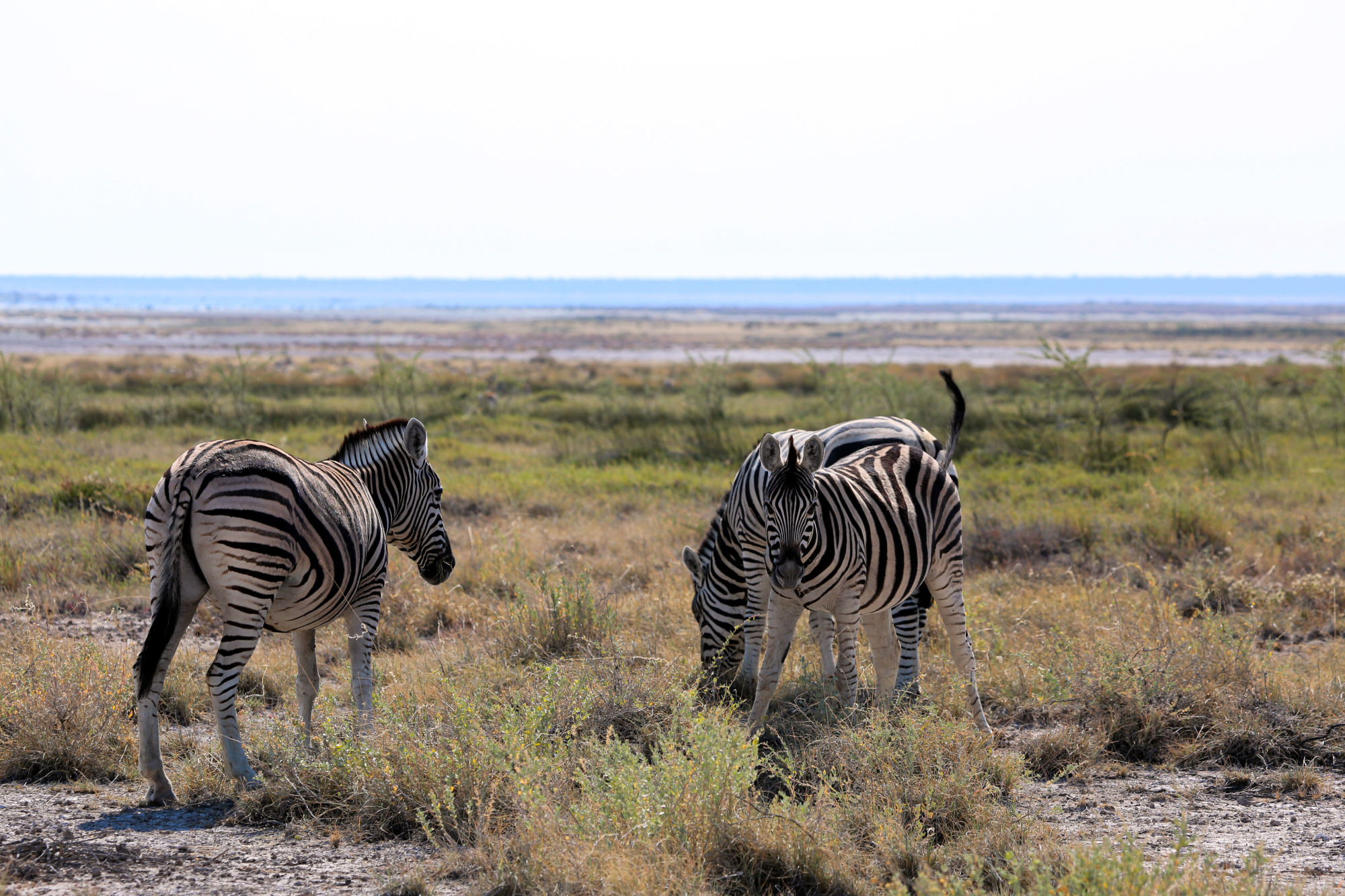 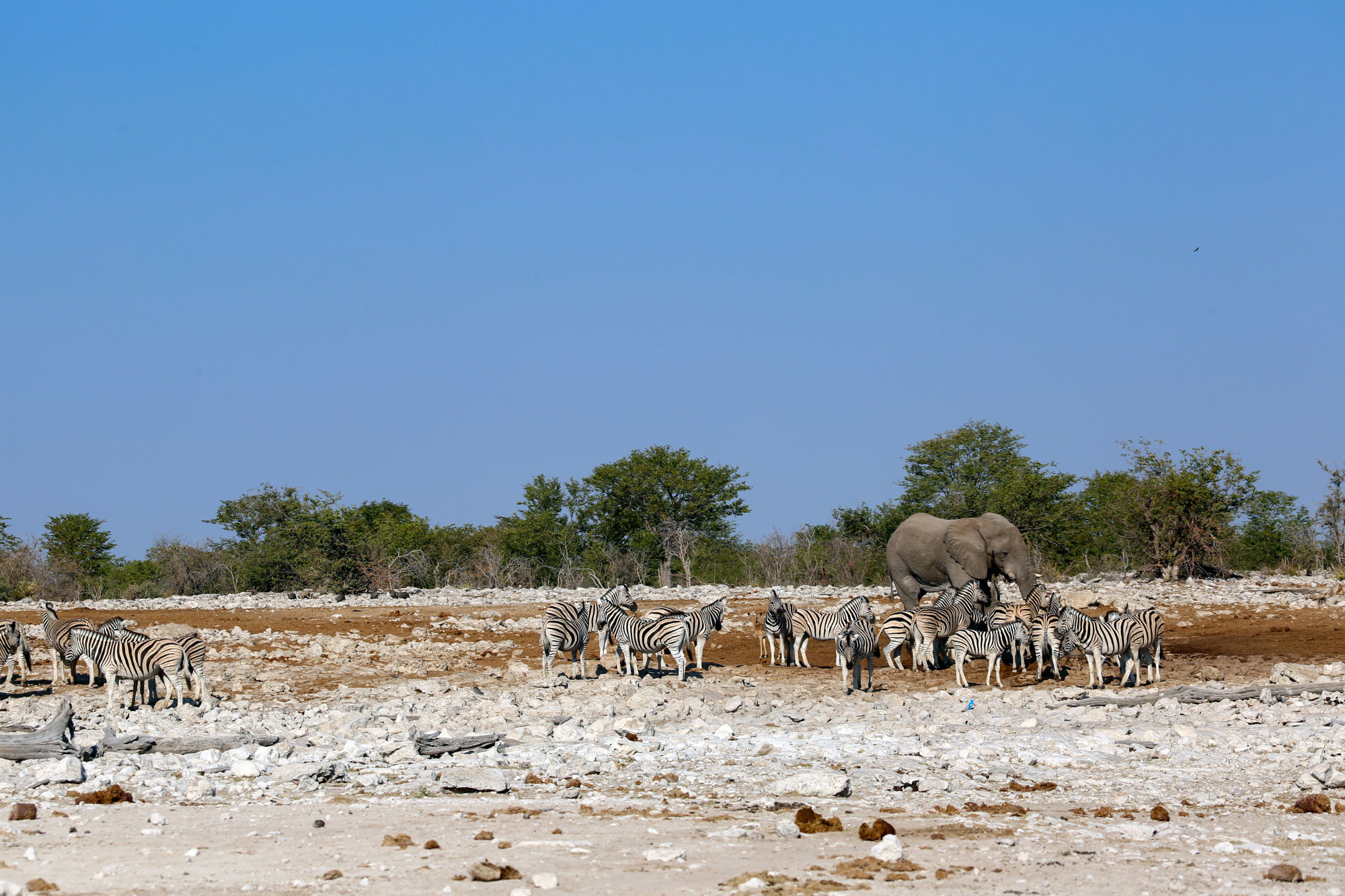 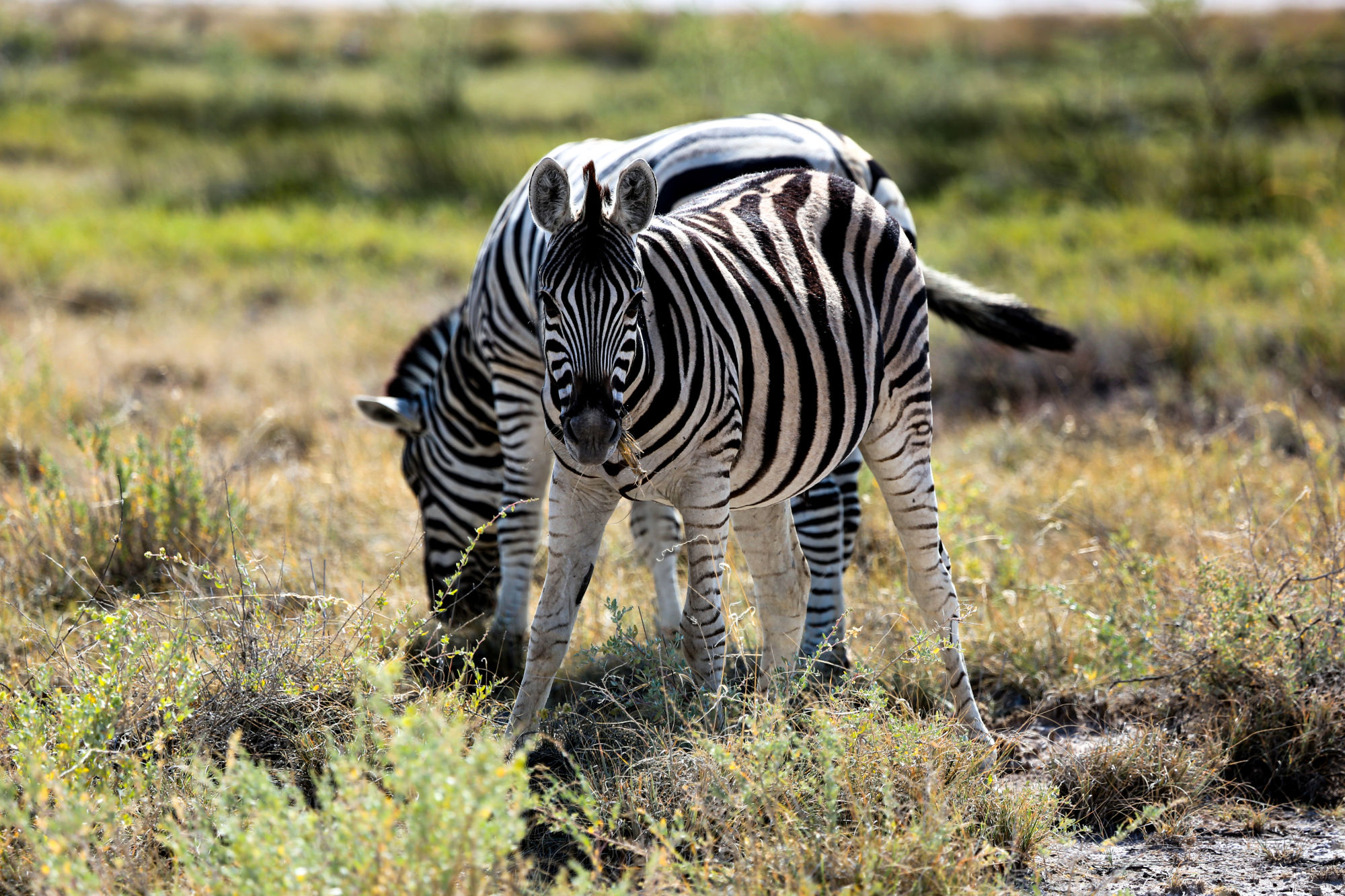 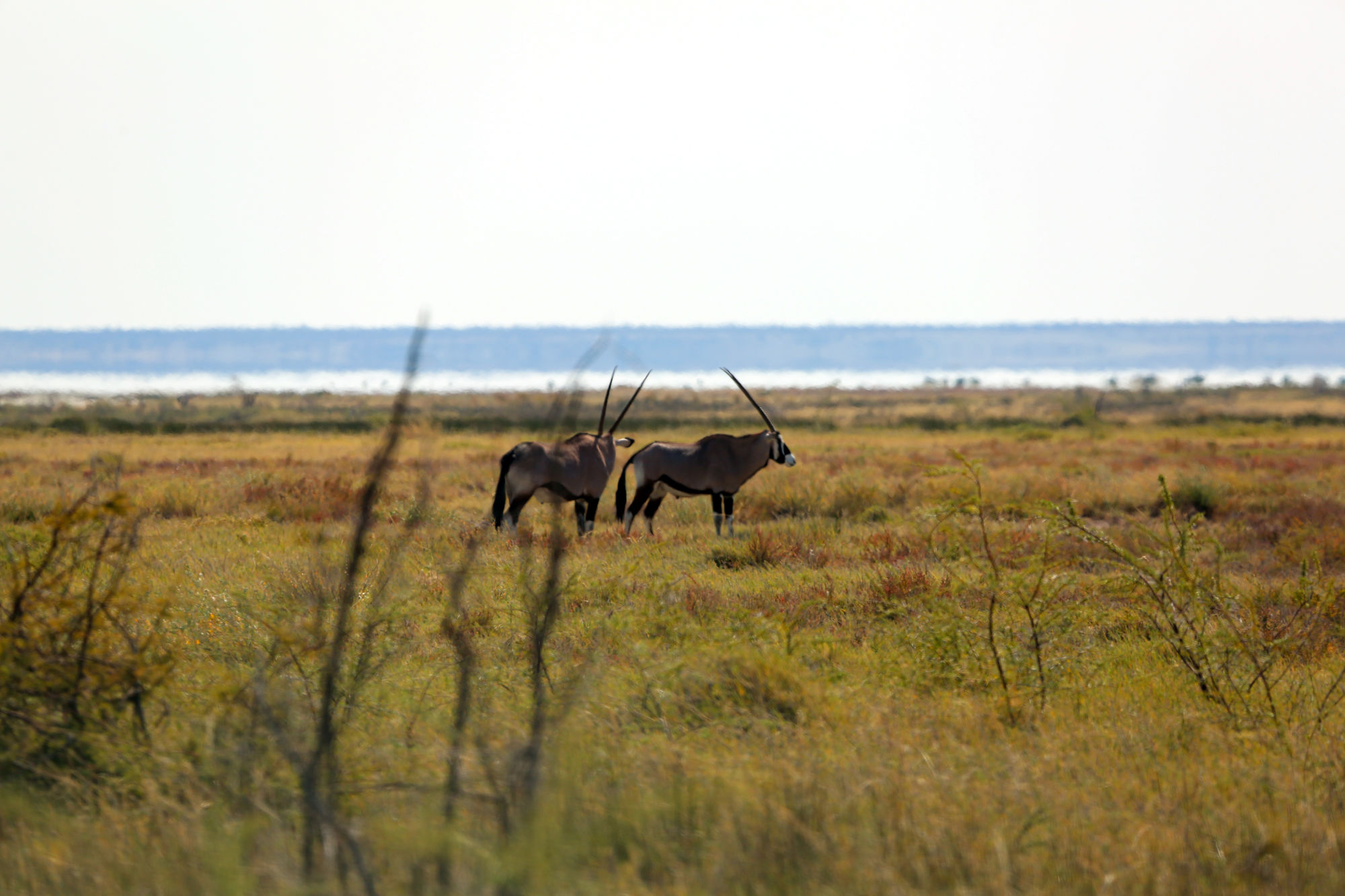 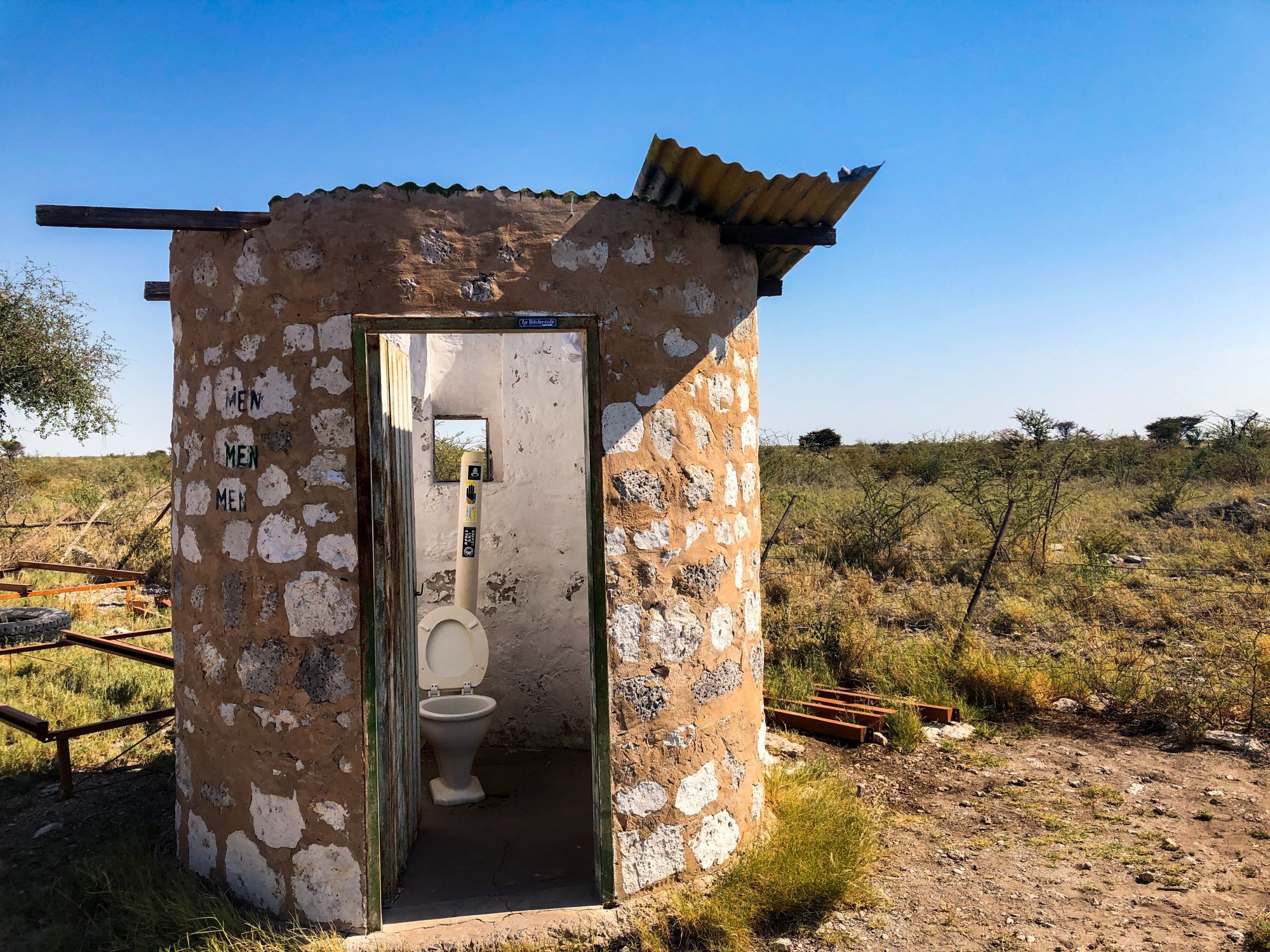 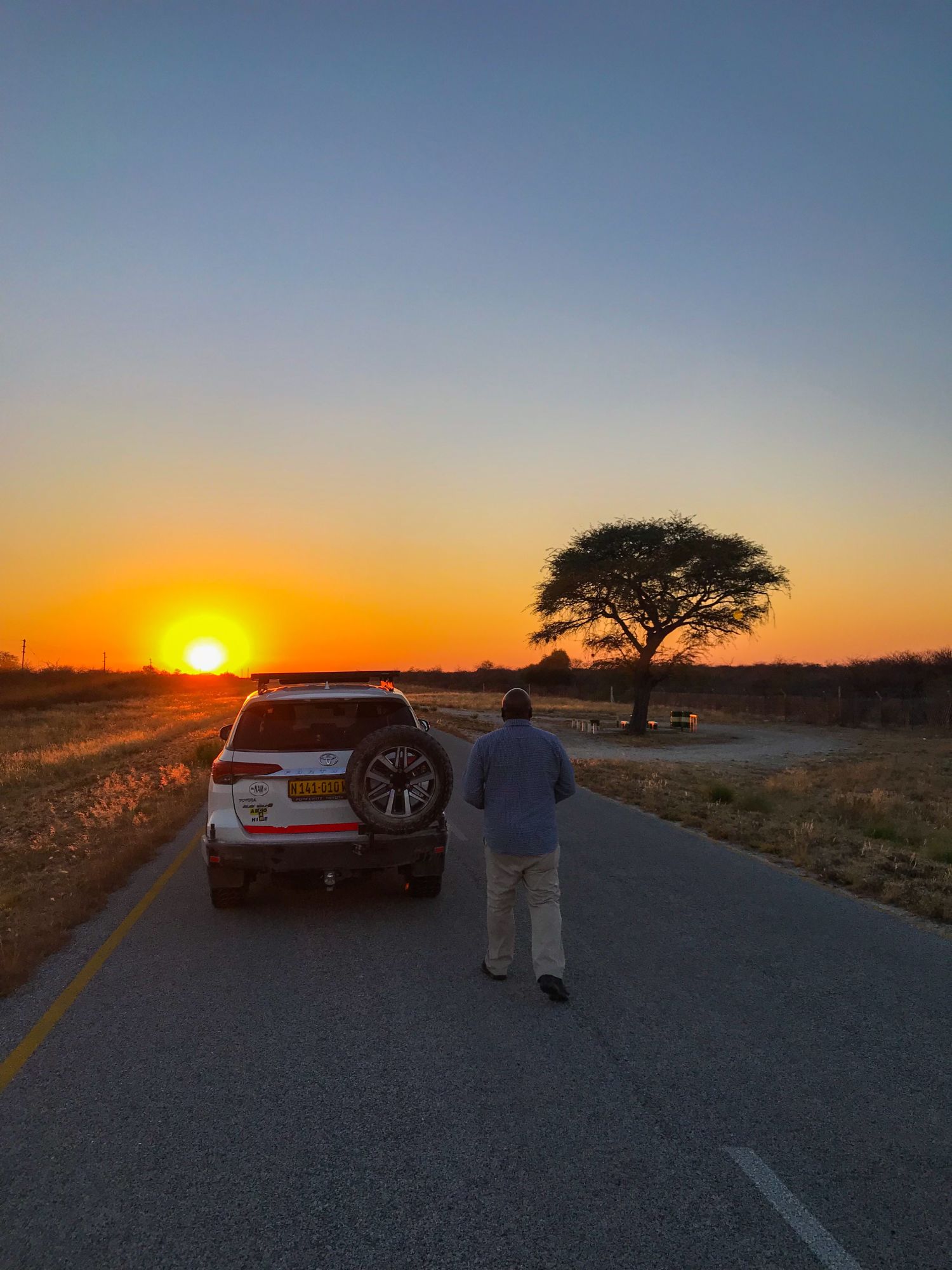 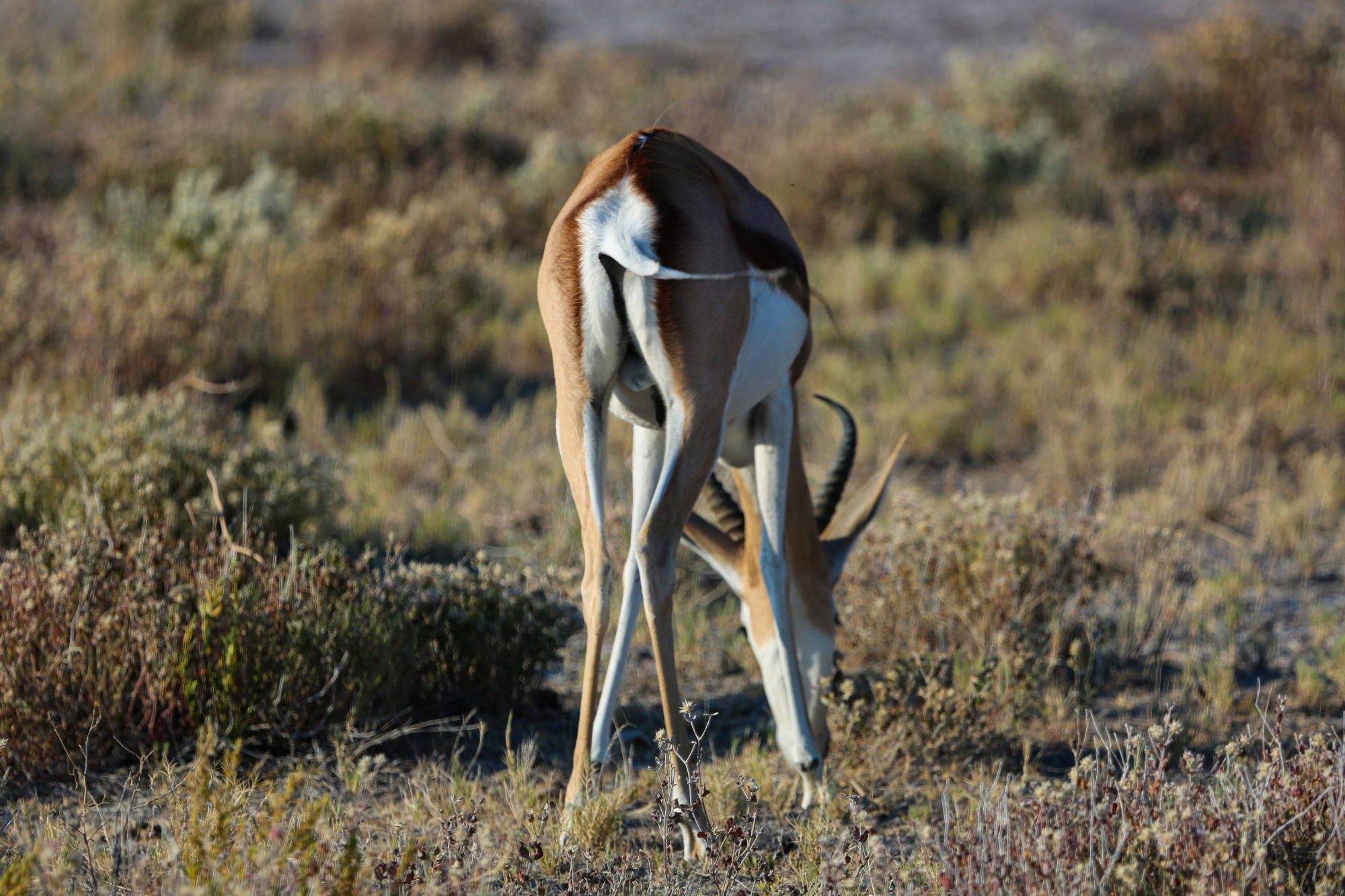 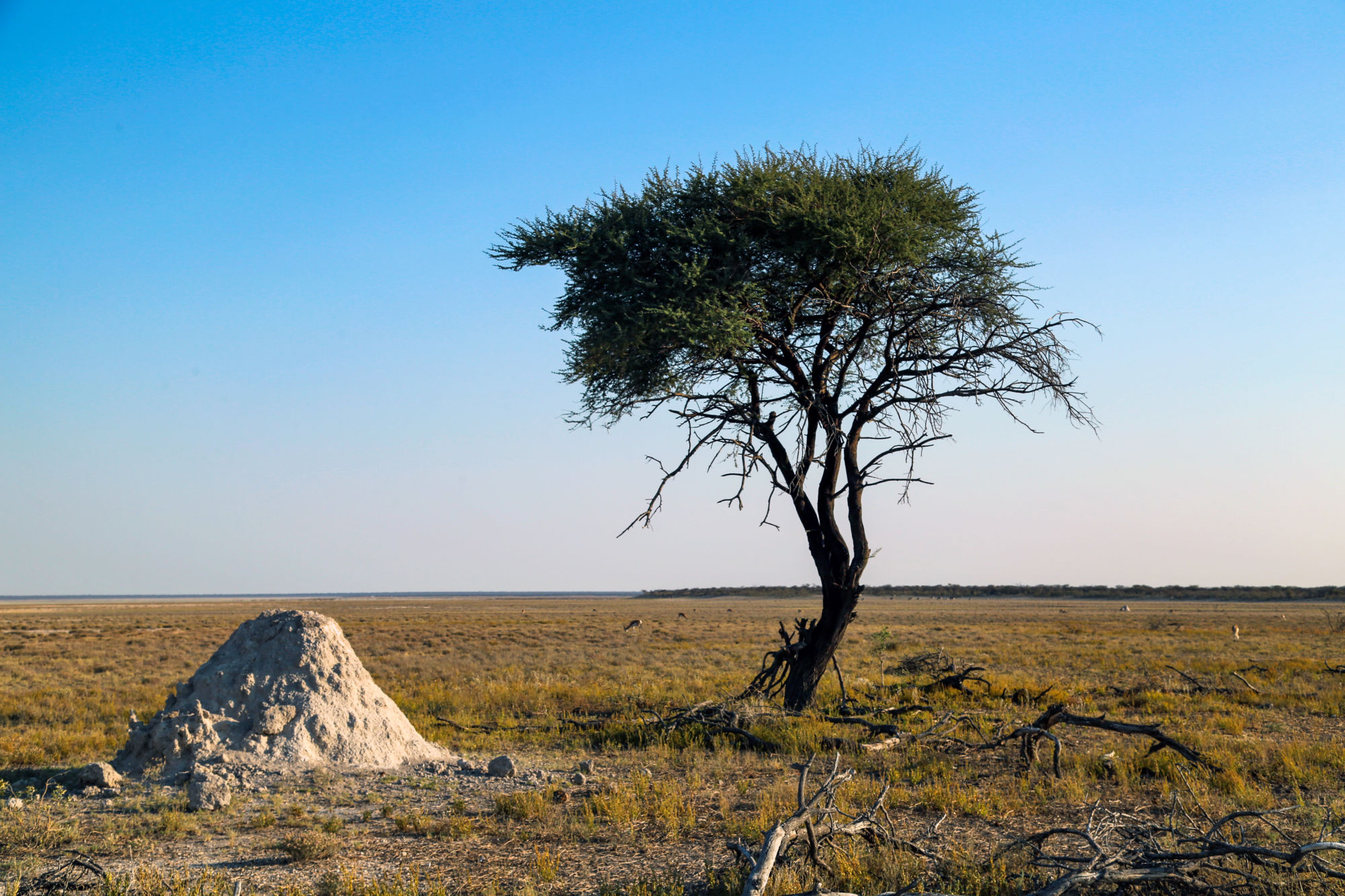 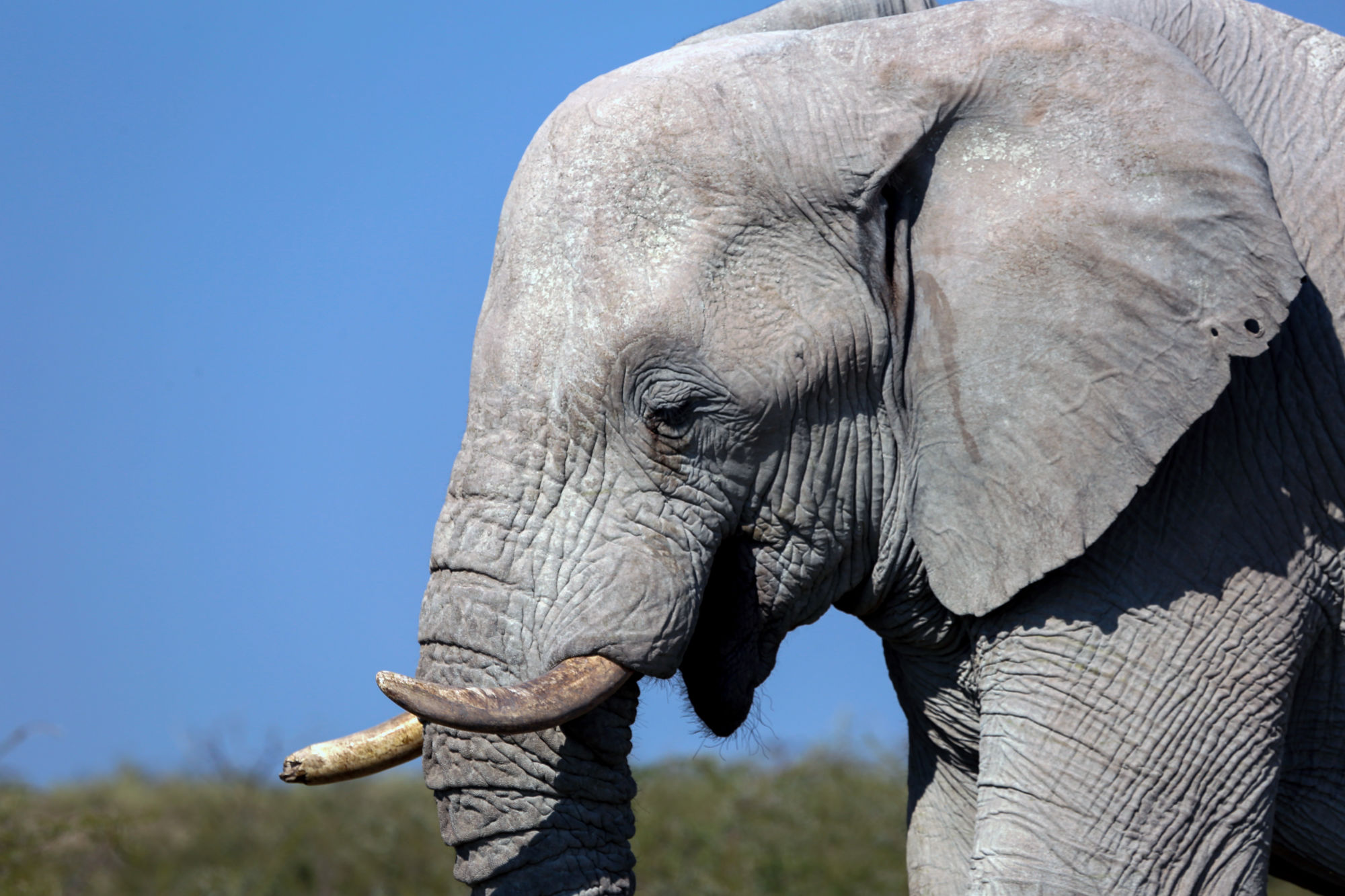 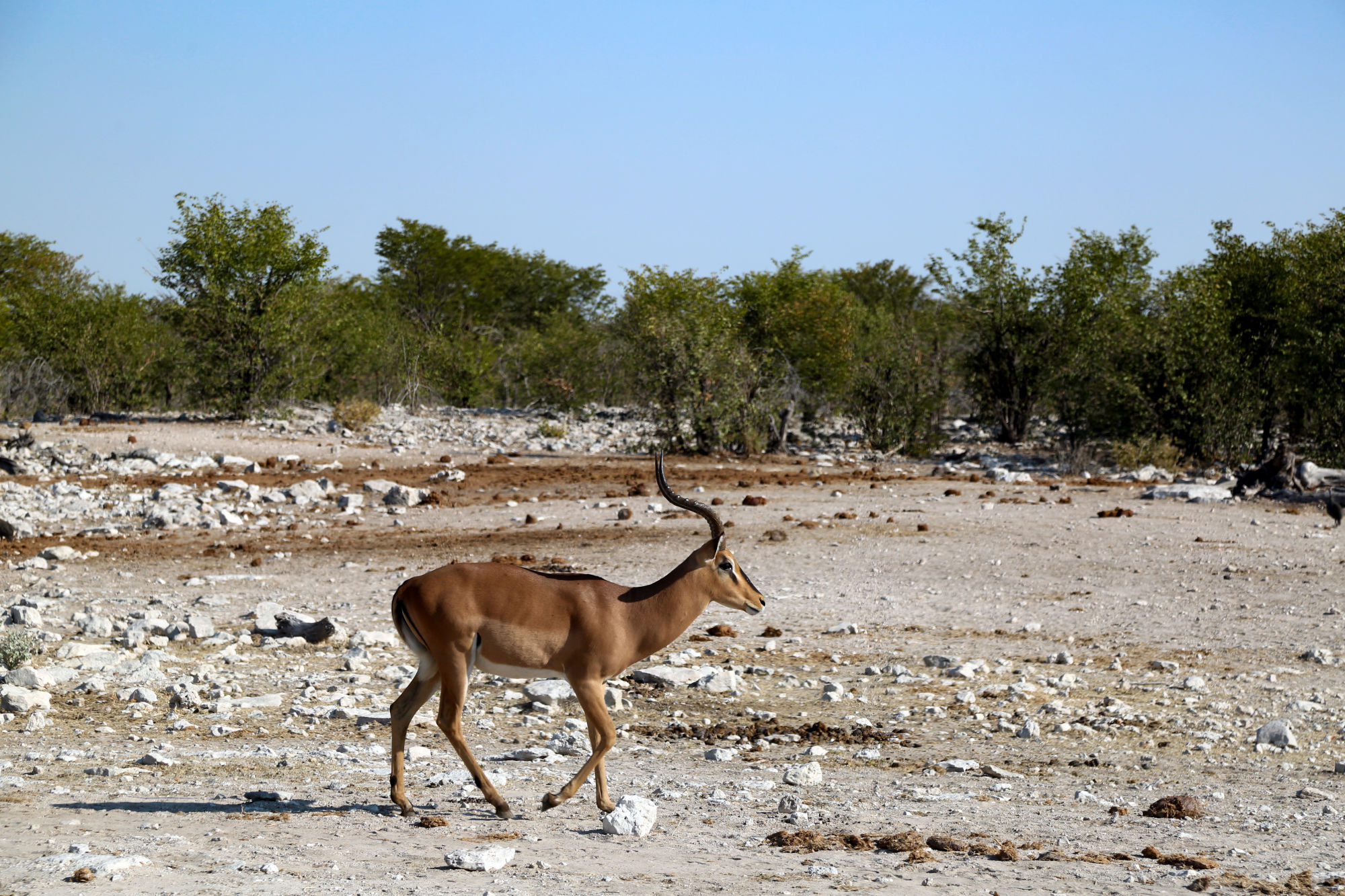 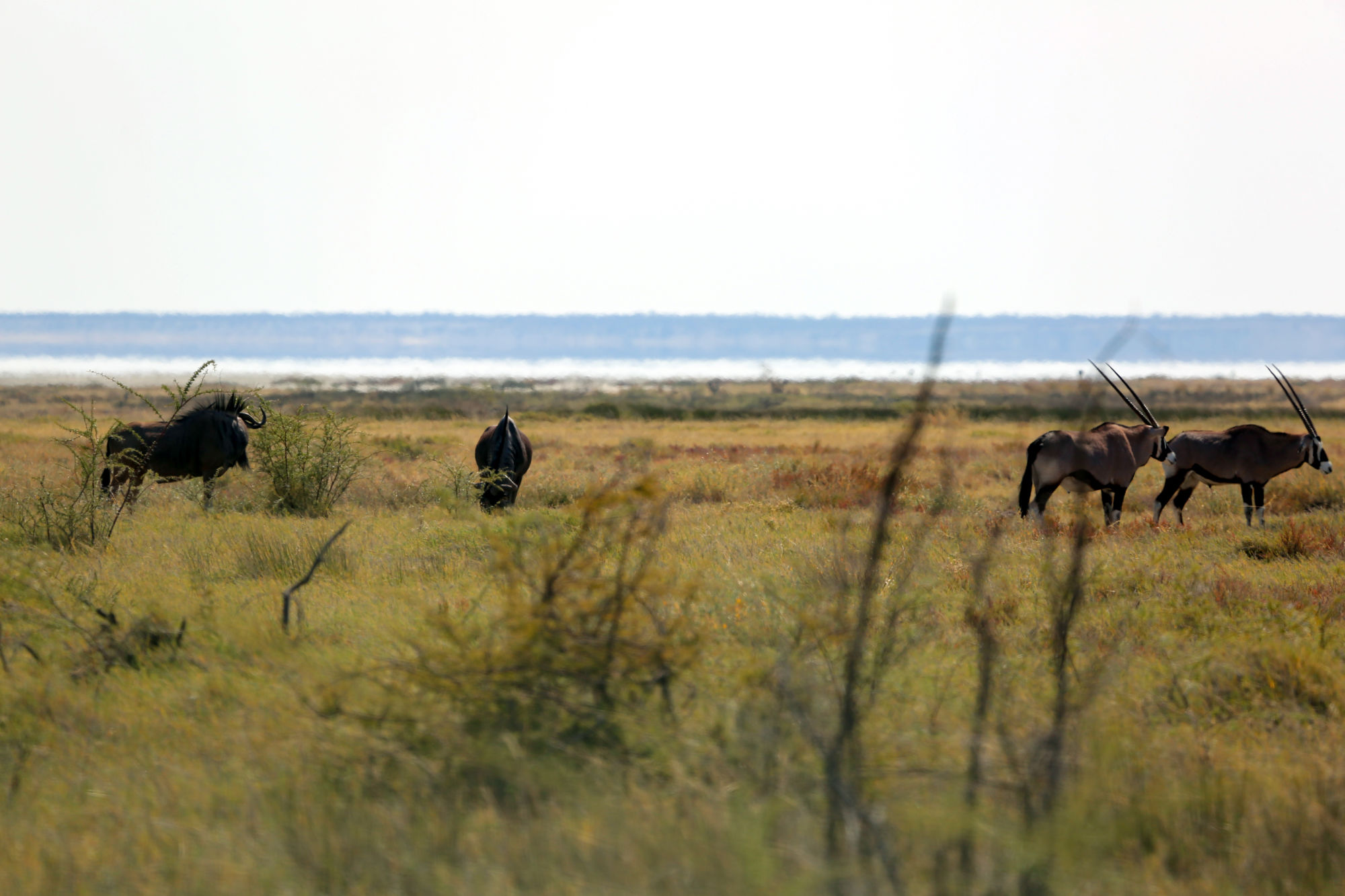 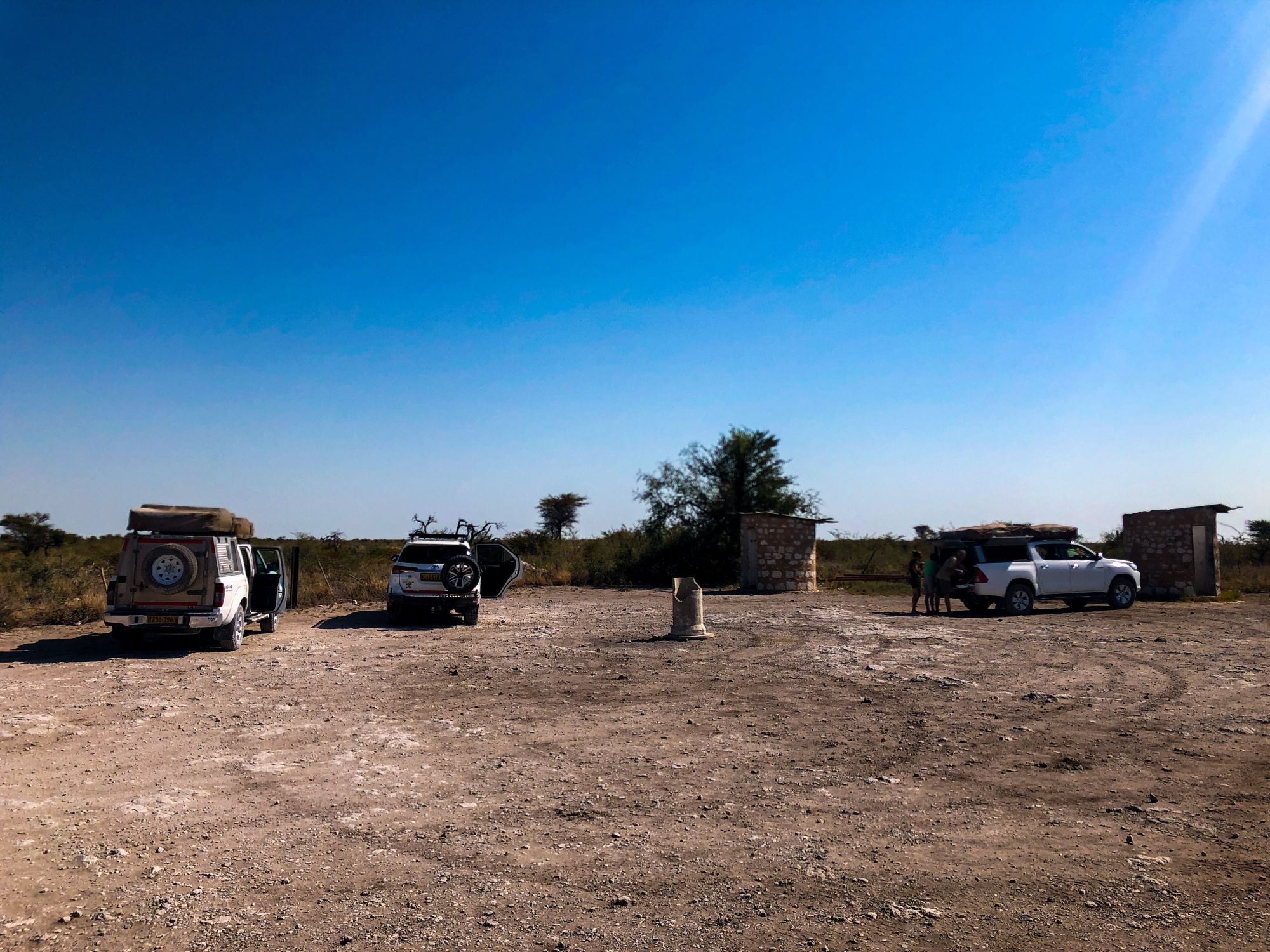 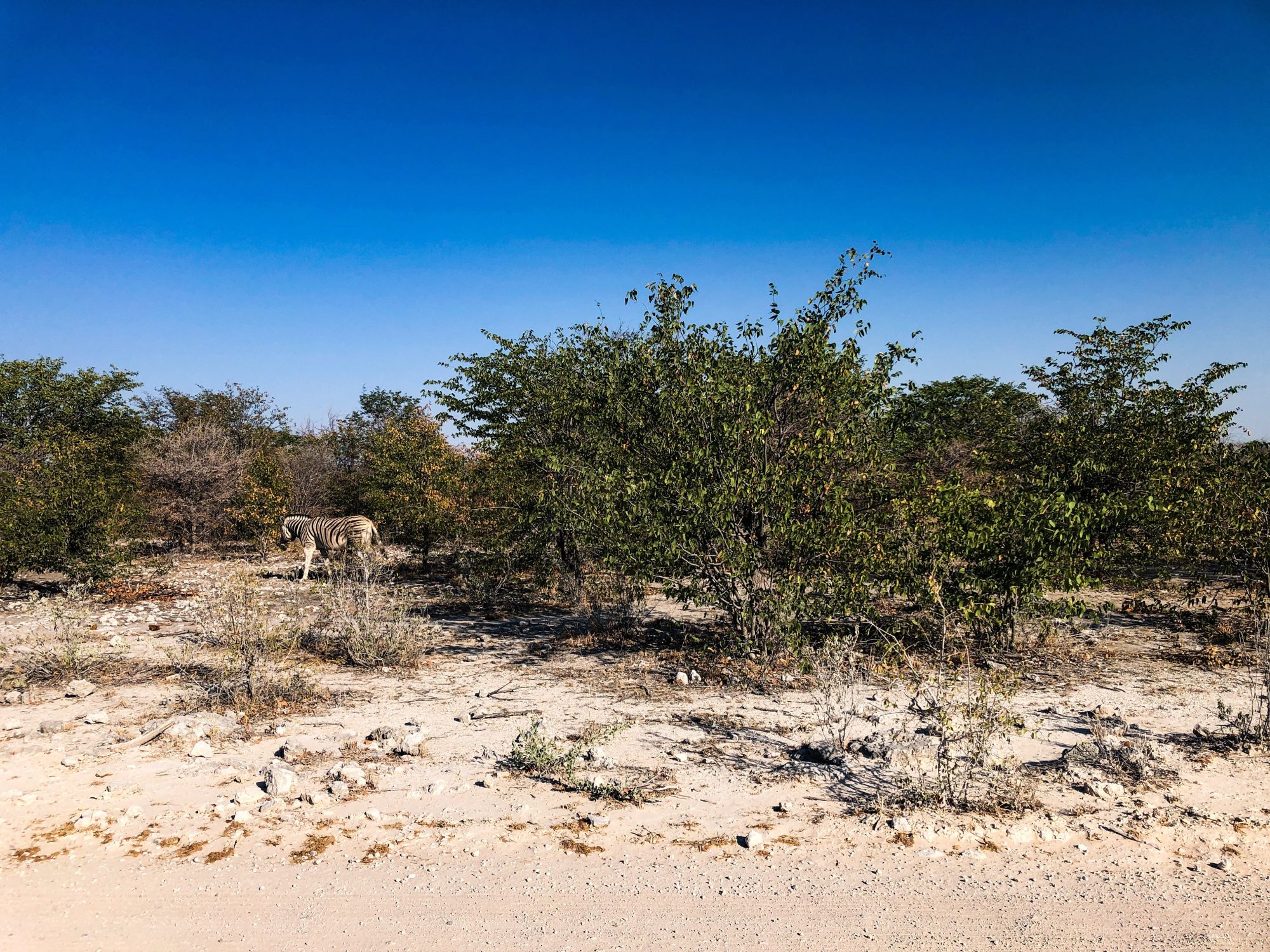 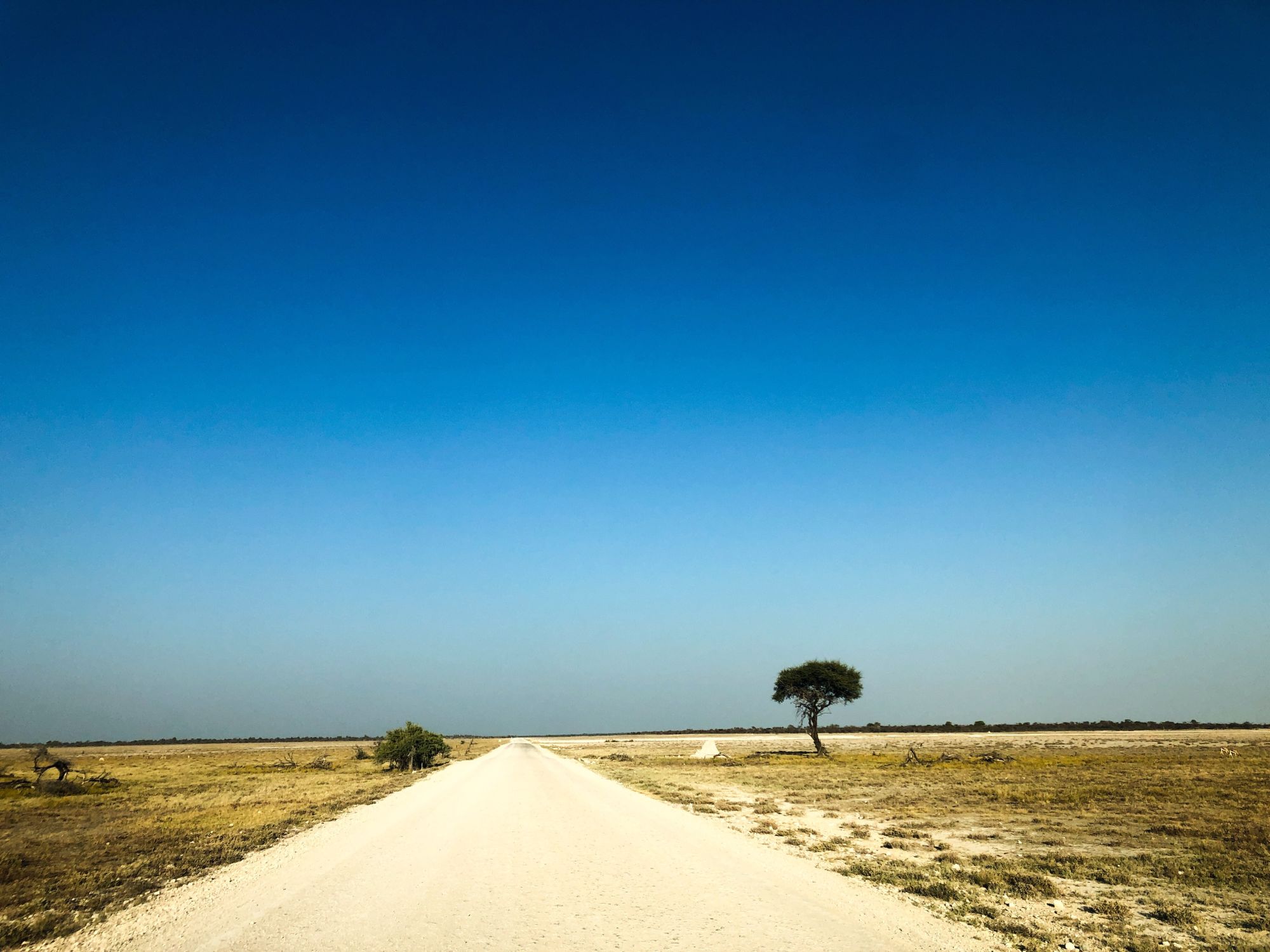 A giant elephant was peacefully surrounded by about a dozen zebras, as wells as several antelopes (springboks). The scene was just magical.

A telephoto lens was a must-have to capture these beautiful wildlife scenes. I rented a Canon 100-400mm back in Windhoek, and it was worth every penny.

As we continued to meander along the gravel roads in search of more epic game viewing, the highlights were stumbling upon another truly majestic lone elephant, oryxes and giraffes.

But what I really wanted to see were big cats like lions and leopards. After hours of driving, these were still elusive. Then, as we were driving back to the gate, telling ourselves that big cats will hopefully be for the next time we visit, we saw two cars stopped by the side of the road.

As we approached them, a young woman pointed to a tree on the side of the road — alerting us to something interesting. I parked the car next to them (of course, always staying inside the vehicle at all times) and, sure enough, we caught a brief glimpse of a leopard.

So, turns out it was a pretty successful self-guided game viewing adventure. Although I wasn't quick enough to snap a photo of the leopard, it was a truly memorable experience to see one in the wild.