Sandwich Harbour: Where the dunes meet the ocean 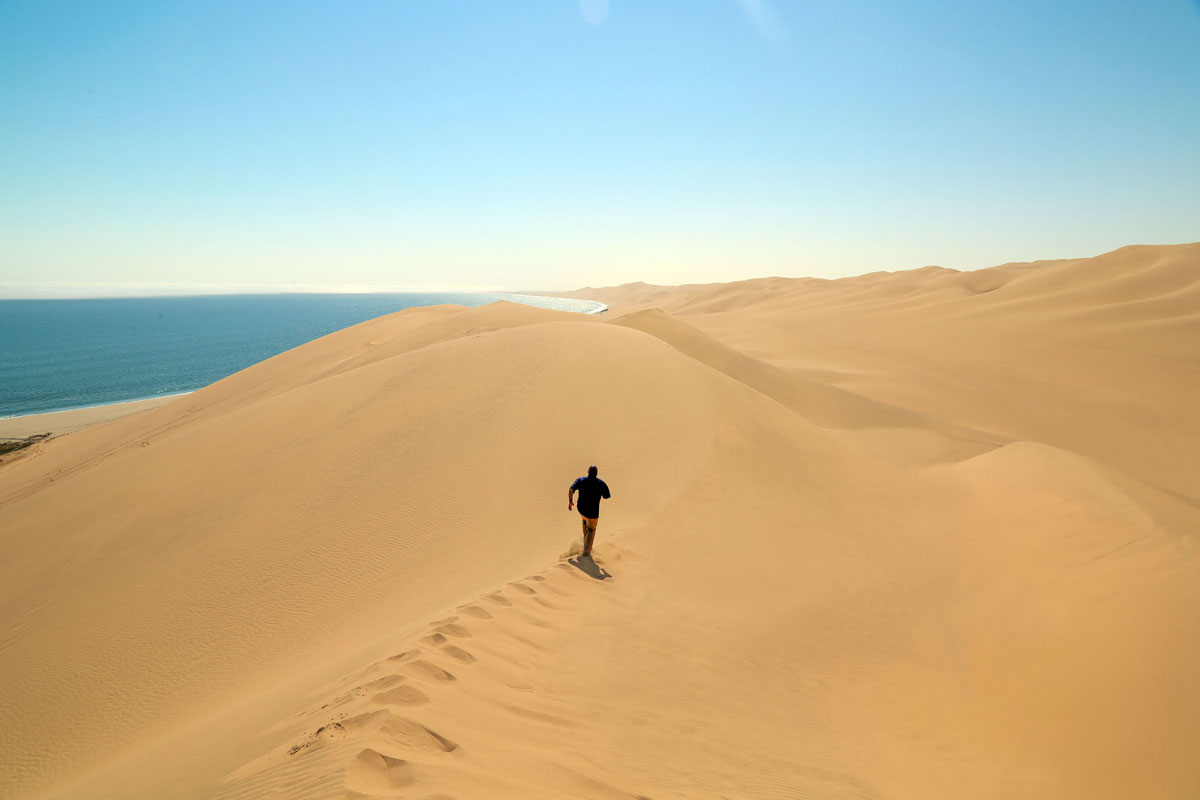 The stunning images of Sandwich Harbour and its colossal sand dunes running straight up uninterrupted along the shores of the Atlantic Ocean, on the western shores on Namibia, triggered my interest in embarking on a self-drive adventure through the oldest desert in the world — the Namib.

Sandwich Harbour is a lagoon located on the Atlantic coast of Namibia, just south of Walvis Bay, within the Namib-Naukluft National Park.

When Amaria initially suggested the self-drive adventure idea through Namibia, I must admit that this destination wasn't the highest on my already long list of African countries to visit.

Having already been blown away by a recent trip to Senegal, where I had the opportunity to marvel at the deserted and undisturbed Atlantic Ocean coast along the Lompoul Desert, I thought I had seen it all.

Also, having lived as an expat on the Arabian Peninsula for the last seven years, I wondered how awed I could still get by a desert landscape.

But the pictures of Sandwich Harbour I saw online sold me. 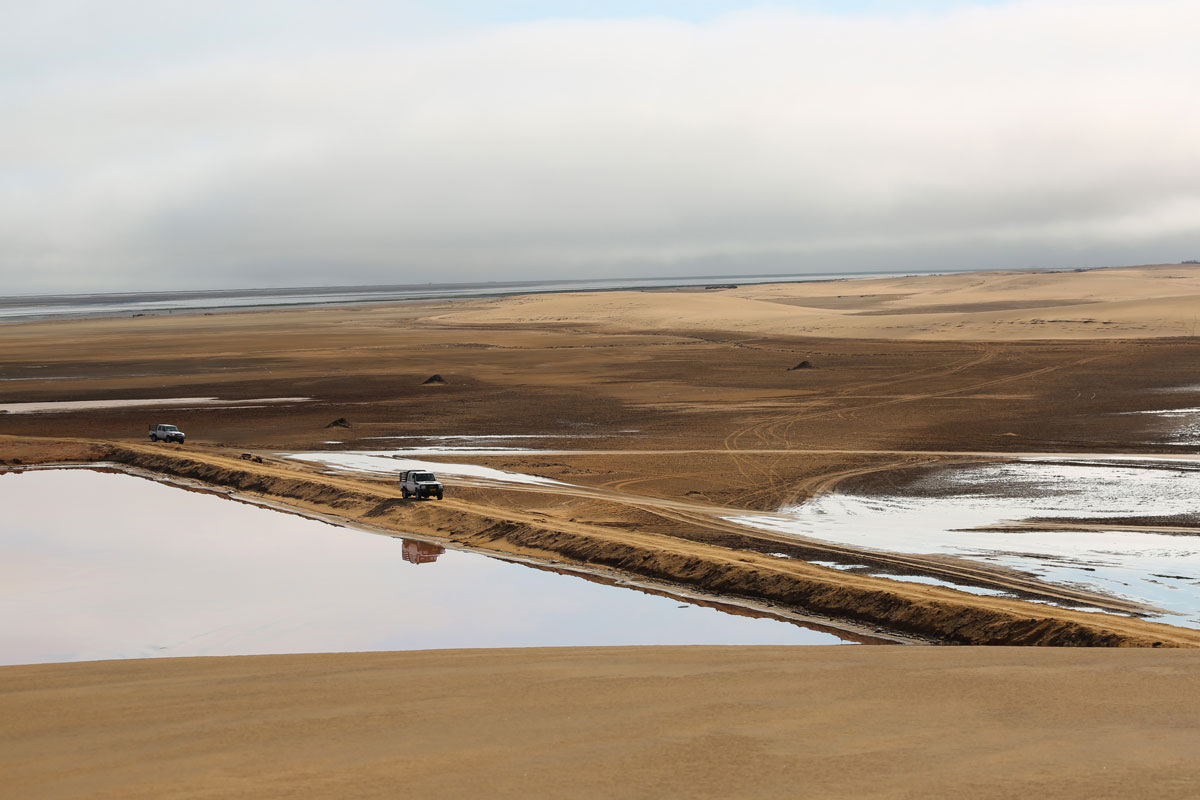 I was even more shocked when I realized that actually being there, and seeing this paradise on Earth for myself, confirmed that photographs couldn't possibly give Sandwich Harbour its full justice.

Namibia needs to to be seen to be believed.

The local Nama people's word "namib" which translates as "vast dry plain" inspired the name of the country. These were the most beautiful cross-country drives I've ever experienced.

Getting there from Swakopmund

After a long 650-kilometre drive to the coastal town of Swakopmund from Etosha National Park, we enjoyed a relaxing day before heading on a 35-minute drive south the next morning towards Walvis Bay — where our Sandwich Harbour adventure would begin. 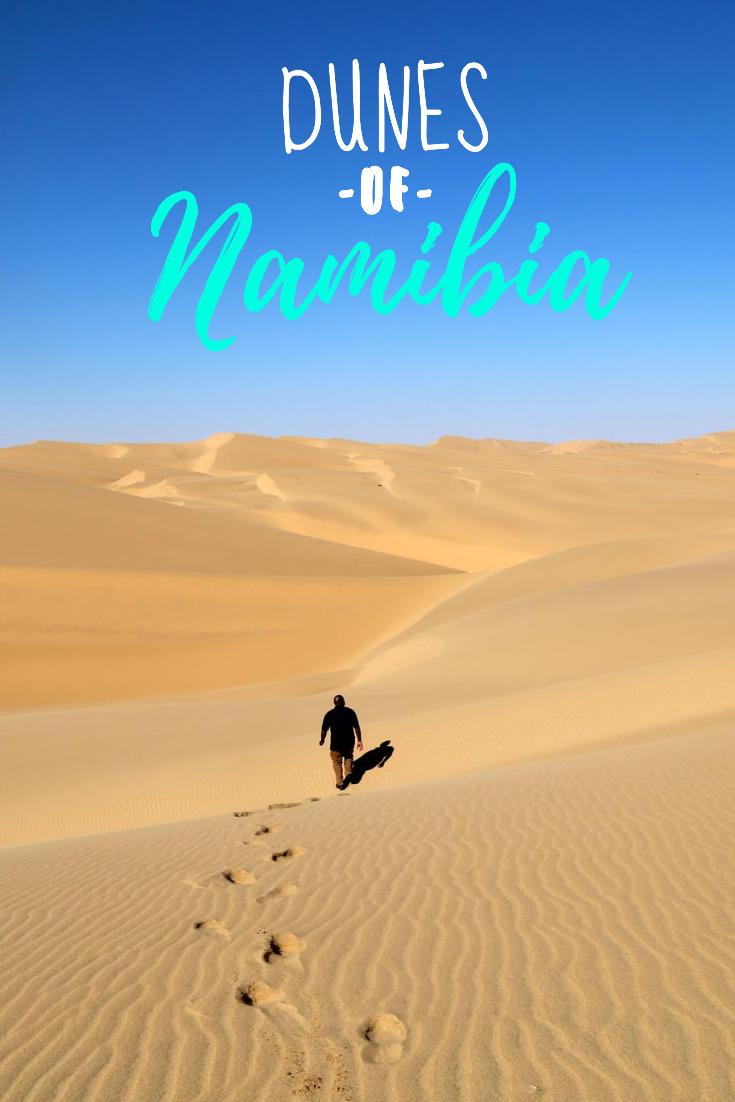 Sandwich Harbour itself is a further 56 kilometres south of Walvis Bay, in Dorob National Park.

We were assigned our own driver/guide and joined a convoy of four other 4X4 vehicles. The tour leaves at 10:00 am and ends at 4:00 pm.

The tour starts with a visit of the very Instagrammable Pink Salt Lakes of Walvis Bay. This also reminded me a lot of Senegal's salt harvesting activity at Lac Rose (Pink Lake), also known as Lake Retba — located north-east of the capital, Dakar. Yes, I posed for the gram there as well.

The impressive 3500-hectare salt-pan complex, established in 1964, represents one of the most extensive solar seas-salt evaporation facilities in Africa.

The water is turned pink from organisms called halobacteria. The brighter the colour, the higher the salinity level — as microorganisms change their hues accordingly.

A matter of tide

It's really not advisable to attempt a self-drive to the Sandwich Harbour Lagoon. Only very experienced 4X4 drivers with intimate local knowledge of Sandwich Harbour's desolate terrain and advanced dune driving skills should attempt it.

Also, successfully getting to the picturesque lagoon area depends on the weather and the ocean tide levels. During high tide, the narrow strip of beach allowing access to Sandwich Harbour is entirely submerged by the ocean's waves crashing into the dunes. This makes the lagoon inaccessible.

A qualified and experienced guide will be able to judge the tide levels and decide how long you have to cross towards the bay and return in time before the tide shuts you out. In some cases, it's not advisable to cross at all, and the expedition to Sandwich Harbour is aborted.

Uninformed self-drive visitors have sometimes gotten stuck by the rising tidal waves of the ocean in the past; and the rescue costs, which they are responsible for, are prohibitive.

Sandwich Harbour is a truly wild environment devoid of any human settlement, so getting stuck there is a daunting prospect.

Thankfully, we visited Sandwich Harbour on a gorgeous low tide day. The drive along the splendid beach was full of surprises. From coming across a jackal, seals, an impressive gathering of cormorant birds basking in the oncoming waves, the ruins of a World War I-era German convenience store that used to serve sailors, and even human skeletal remains, the beach drive certainly didn't disappoint.

As we approached the lagoon area, our convoy took a left turn, departing the beach, and we began the exciting ascent of the tall dunes.

It's hard to describe the sheer beauty of the panoramic views of these endless gigantic sand dunes meeting the bright cerulean tones of the Atlantic Ocean.

Dare I say I've "now" seen it all? It's a beautiful world we live in. So I'm sure there are many more wonders to discover. But Namibia has been the best trip of my life ... so far.

(NC) Most of us have spent the winter cooped up indoors and are waiting for the slightest hint of wa [ ... ]