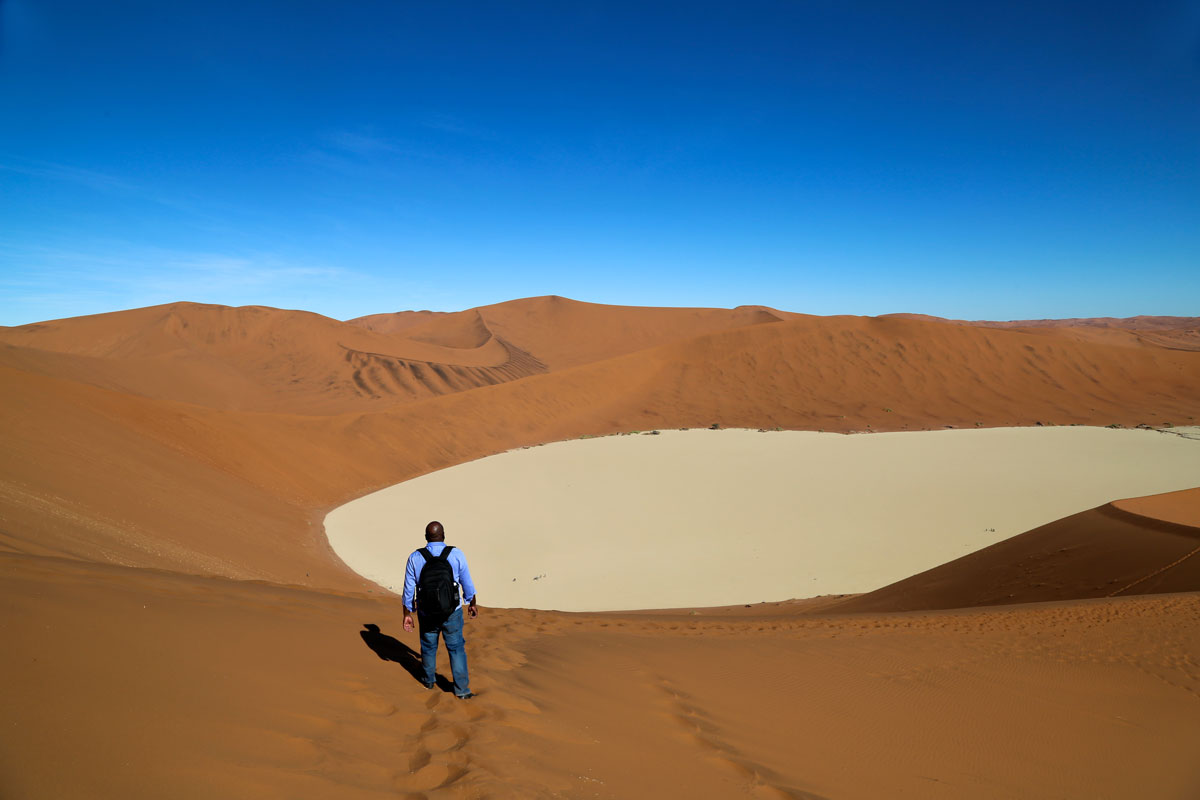 In addition to Sandwich Harbour — off Walvis Bay, a must-see destination on the list for my trip to Namibia was Sossusvlei. The two main attractions are the well-known Dune 45, the Bid Daddy Dune and the majestic Deadlvei, awe-inspiring valley floor lying at the foot of the latter, where 600 to 900-year-old dead trees contrast against the cracked salt and clay white pan.

In the language of the local Nama people, "sossu" translates as a dead-end or place of no return; while "vlei" is an Afrikaans word referring to a shallow lake or marsh. Bringing them together, the name Sossusvlei denotes a dead-end marsh.

The sand of Sossusvlei is approximately five million years old.

Sossusvlei is located within the Namib-Naukluft National Park, the largest conservation area in Africa, spanning almost 50,000 square kilometres across the Namib Desert. It's the fourth largest national park in the world. The natural landscapes, comprising of towering terracotta-coloured dunes — the highest in the world at over 300 metres — and vast dry plains, are among the most beautiful vistas on the planet. 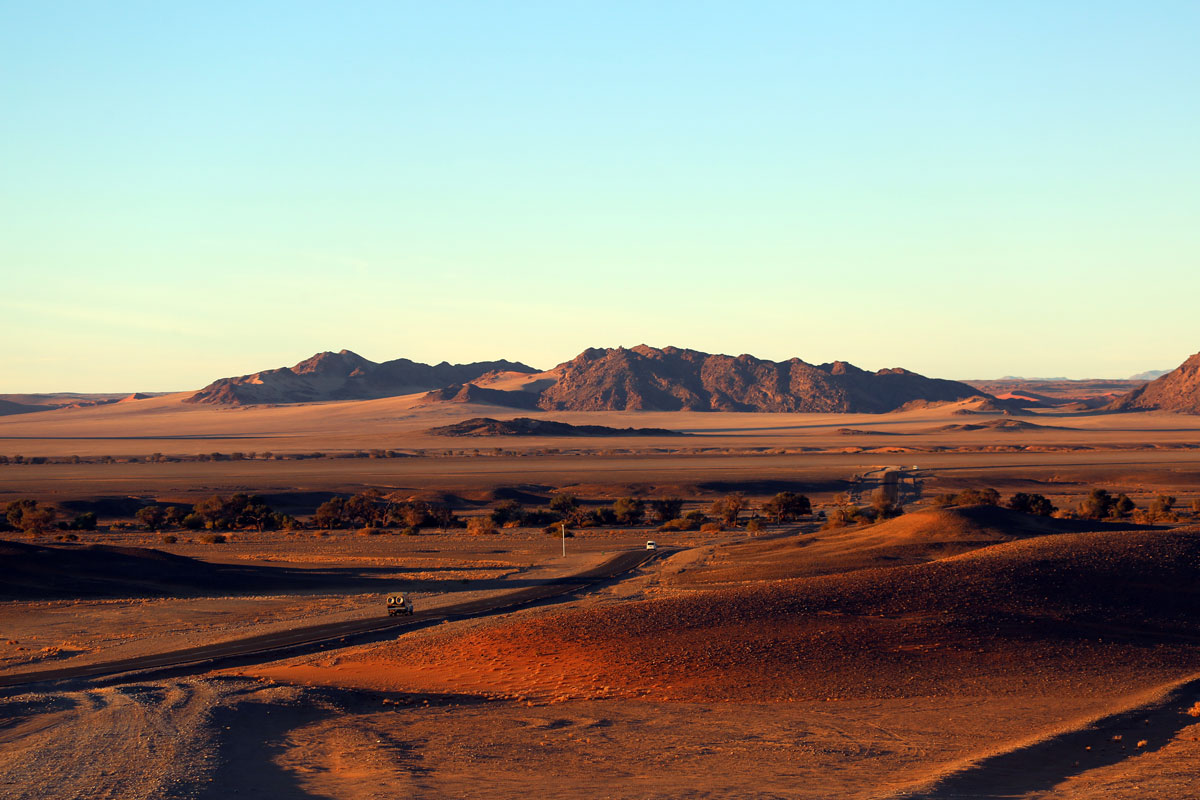 A race against the sunrise

The Sesriem gate is the main gate which grants access to Namib-Naukluft National Park through the small settlement of Sesriem. It's the starting point of most Sossusvlei adventures.

There are several accommodation options in Sesriem. But one important thing to be aware of is that the Sesriem Gate opens at sunrise and closes at sunset. So travellers interested in experiencing the priceless views of the sunrise over the iconic Sossusvlei dunes must stay at one of only two accommodation establishments located within the National Park's main gate — which are the Sesriem Campsite or the Sossus Dune Lodge. Understandably, booking long in advance is highly recommended because they're often fully booked and are also typically more expensive.

Guests of these two establishments gain access to the secondary gate, which opens one hour before sunrise. It's an early start on the race against the sunrise.

Permits to the Namib-Naukluft National Park currently cost N$80 per person for tourists outside SADC (Southern African Development Community) member countries, N$60 for South Africans, and N$30 for Namibians. There’s also a N$10 fee for cars up to 10 seats. If you plan on going to Sossusvlei at sunrise, you should buy the permit the day before.

From Sesriem Gate to Sossusvlei

Since we were unable to secure accommodation beyond the main gate, Amaria and I chose to stay at the Sossusvlei Lodge — located a mere 500 meters from the National Park's main gate.

Various options are available to visit Sossusvlei. Since a nicely paved road has been built in 2006, the self-drive to Dune 45 is no longer reserved for the most adventurous. The tarred road spans about 65 kilometres from Sesriem Gate, passing Dune 45 at around the 45th-kilometre point, and on to a 2WD parking area — which is located 4 kilometres from Sossusvlei's Big Daddy Dune and Deadvlei. Make sure to respect the speed limit of 60 km/h.

The remaining 4 kilometres between the end of the tarred road and Sossuvlei can only be traversed on a 4X4 vehicle. Experience driving on sand is desirable but not required. It's perfectly doable. It's advisable to lower your tire pressure 150 kPa before engaging the sandy trail.

Another option if you don't have a 4X4 vehicle is to leave your 2WD car in the parking area and take the available public shuttle buses which will take you there for 100 $NS/pp return. Another option is to bum a ride with self-drive visitors with extra space in their 4x4 vehicle.

Sesriem lodges like the Sossusvlei Lodge also offer early morning excursions which will take you the entire way.

As mentioned above, the famous Dune 45 is so-named because it is located 45 kilometres from Sesriem Gate along the paved road. It's the dune most-often photographed on Namibia travel brochures.

Honestly, there are many more similar dunes along the 65-kilometre drive to Sossusvlei, so it didn't strike me as particularly unique. But it's popular partly because it's a designated dune which tourists are allowed to climb. It's a relatively easy climb as Dune 45 stands at 170 metres.

About 20 kilometres past Dune 45, the paved road comes to an abrupt end at the 2WD parking lot. From there, a few kilometres of sand paths stand before the truly magnificent site of Sossusvlei.

Standing at an astounding 325 meters, the sand monster called Big Daddy Dune which towers over the Deadvlei valley floor below attracts thousands of trekkers every year.

The reward of climbing what's sometimes referred to as the "Crazy Dune" is the breathtaking views of the white sand pan below, laying in sharp contrast to rust-red sandy terrain surrounding it, and the dark fossils of camel thorn trees dotting Deadvlei. 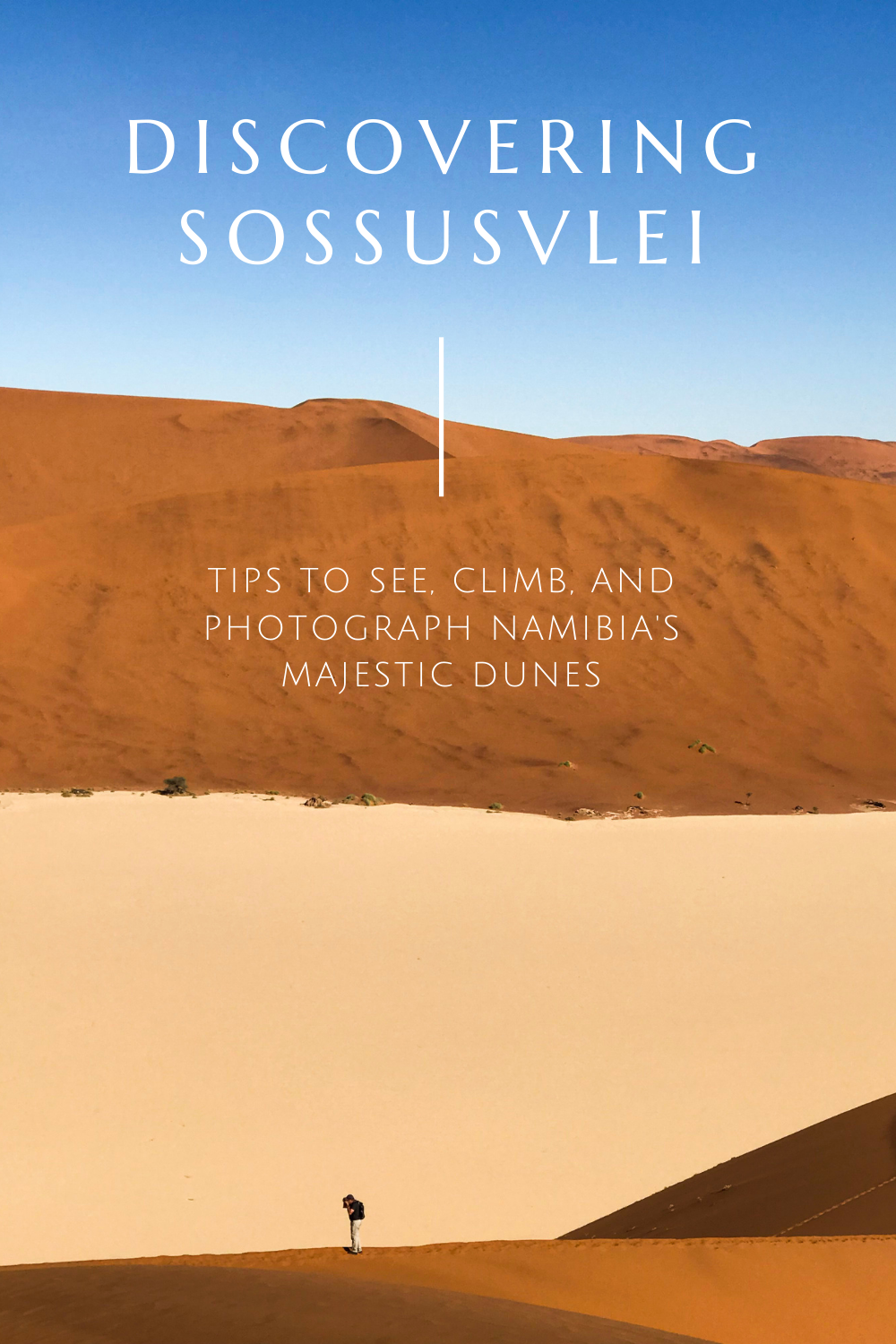 Big Daddy isn't the tallest dune in the world though; this title belongs to Dune 7, located near Walvis Bay — which stands at a dizzying 383 metres. It's called Dune 7 because it's the seventh dune one encounters after crossing the river Tsauchab.

But make no mistake, climbing Big Daddy is a daunting task. Allow for two hours to reach the top, a bottle of water and sun protection. The bragging rights of making it to the top are well worth it. For me, this will be for next time as I only managed to make it up to around 250 meters, past the first plateau.

As hard as climbing Big Daddy is, it's a fun journey of a few minutes to barrel down the slip face of the star dune onto Deadvlei. The area where the white pan lies was cut off a long time ago from the Tsauchab River by a large dune.

The Tsauchab River had previously left shallow pools — allowing a large amount of camel thorn trees to grow and flourished between 600 to 900 years ago. The drastic change in climate due to the river's retreat cause the ancient trees to die. The now fossilized black trees have continued to be preserved by the extremely dry climate.

Experience incredible desert scenery and cosmopolitan city streets as you discover the diverse riches of South Africa and Namibia on this two-week adventure.

Travel to Africa and jump onboard an exhilarating journey through the magnificent nations of South Africa, Namibia, Botswana and Zimbabwe. Southern Africa is bursting with a diverse array of wildlife, culture and landscapes - all waiting to be explored and celebrated.

In addition to Sandwich Harbour — off Walvis Bay, a must-see destination on the list for nbsp;[ ... ]

Etosha National Park was high on the list when planning my self-drive adventure in Namibia.  [ ... ]